According to Duncan, “Too often, inexpensive tube gear runs in “starved plate mode,” where the tubes are not actually helping to create the distortion. The high-plate voltage and 100% vacuum tube signal path allows the tubes to operate at their fullest potential and provide maximum dynamic range. The means you get the most gain and all the smooth tone you expect from a high-quality tube preamp.”

I will second that.  These pedals have a warmth and clarity I’ve not heard from any other overdrive pedals.  I A/B’d the Twin Tube Classic and Twin Tube Blues against several of my favorite overdrive pedals (one was green, one was blue) on several different amps, and the difference was stunning.  Both Twin Tubes offer a massive amount of gain, even on the rhythm channel.  With a gain and a volume for each channel, you can get anything from a nice clean boost to a super-saturated overdrive.  You could even use them as a gain cut if you wanted!

I found the differences between the Classic and the Blues to be subtle, I didn’t get a chance to try the Mayhem, which seems like quite a different animal.  The Twin Tone Classic features two 6021 tubes, while The Twin Tone blues features 6111 dual triode tubes, the same used in the high quality Neumann m149 microphone.  I would make the rough analogy that they differ as much as a 12AX7 and a 12AT7 respectively in your amp.

The “Blues” was amazing for my low-wattage tube amps, which break up fairly early.  The high end continues to cut through even as the tone gets beefy.

The “Classic” on the other hand, colors the tone a bit more.  I like it pushing a loud, clean amp like a Fender Twin.  I’ve never heard such a rich tone at a low volume from that amp.

When we delve into the lead channel of either of these pedals, I would say Duncan is selling itself short with the Blues and Classic monikers.  Both of these pedals have the ability to scream, with a ridiculous amount of saturation from the pedal, and tons of gain to push the tubes of your amp.  This second channel can almost become unruly, pushing your rig to microphonic feedback (that’s the bad, squeally kind) at high levels of gain.  I found this to be the case with the “Blues” more than the “Classic”.  Of course, you don’t have to crank it up all the way, but I do prefer gear that can be pushed “further than it needs to go” to something that doesn’t go quite far enough.

The pedals feature a bass and treble knob which applies to both channels.  I found myself occasionally rolling off the bass a bit on the “Classic” Pedal when running the lead channel hot.  The only problem is that you have that EQ setting applying to the rhythm channel as well, which might not be needed. 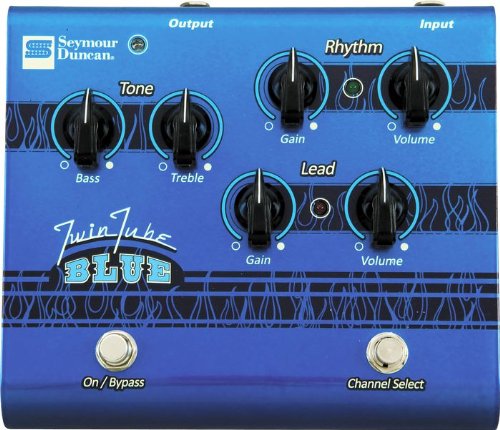 These pedals are sturdy pieces of gear.  They take up a fair amount of floor space, but one will definitely take the the place of two discreet pedals pretty well.  (I usually use a tube screamer plus a clean boost on my board)  Because of the tubes, the Twin Tubes need a propriety 18v power (wall wart) supply, which is a bit of a bummer, but you’re not going to get that tone any other way.

Either model is a worthwhile addition to a stage or studio rig.  With the “Classic” or the “Mayhem” you could safely arrive at a gig where they told you there was a Marshall, but there’s only a Roland Jazz Chorus, and have a full spectrum of warm tubey overdrive with plenty of fire for your leads.   Choose the “Blues” for more clarity, and the “Classic” for more OOMPH!

I’ve been a fan of Duncan pickups for years, and I’d say they’ve maintained their attention to detail and tone in their recent foray into pedals. –Matt Rocker