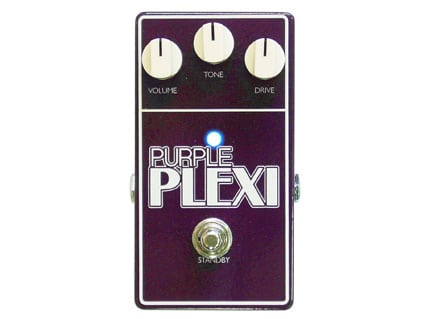 The Marshall Plexi is one of the most beloved and iconic amplifiers of all times, and while many manufacturers have tried to harness this Marshall monster in a compact stompbox format, few have been able to successfully pull off the character that give it that magical quality.

Lovepedal’s Purple Plexi stands as one of the better “Plexi-in-a-box” guitar pedal designs. It sports that massive Marshall mid-range, and can conjure those enormous stadium-sized tones at a whisper volume. The circuit is also very responsive to your guitar’s volume control and pick attack dynamics – just like a real Marshall. There’s also a version with an extra boost circuit with its own footswitch, hosted in a case is about twice as wide (see Gear Man Dude’s video below).

In this pedal, you can access many different eras of Marshall Plexi designs via the responsive gain control and tone stock, and in doing so almost nail some of the best-recorded guitar tones in history.

The Lovepedal Purple Plexi ios included in our list of the Best Plexi Pedals. – Brandon Stoner

We redesigned everything about it layout and parts wise.
The casing is now smaller like an MRX size unit.
It features the big old school film caps which are way fuller sounding and went with carbon resistors because they are a bit warmer than what we were using.
The biggest difference you would notice right away is the taper in the gain control. The old ones were bunched up at the end. The new ones are spread out and have a even progression to the max gain setting. It also has a better note decay to my ears because of the way we configured the new gain control. Tech terms, we shunted 100k off the input signal to ground which helps with the decay and a smoother feel. I think this version cleans up even faster on the guitar volume knob because of the input signal being padded down now.