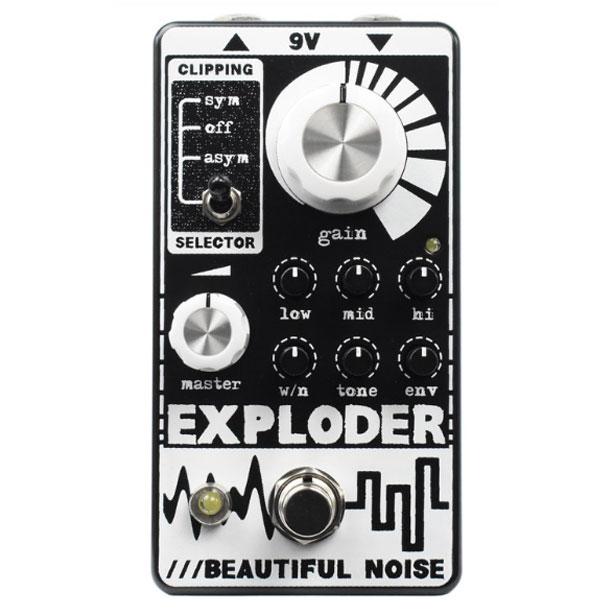 Handmade in Newcastle, Australia, the Beautiful Noise Exploder is a distortion pedal for the heavy yet tweaking-inclined guitarist, with a couple of interesting twists.

Besides the expected (white) Gain and Master knob and a 3-way EQ section with (smaller black) Low Mid, and Hi controls, the Exploder offers a 3-way switch controlling the diode’s clipping, producing the following:

Sym: Even hard-clipping: compressed and fuzzy at high gain.

Off: No diode clipping is removed: distortion caused by overloading op-amps: buzzing, noisy and explosively loud.

As if that wasn’t enough, the pedal has another three small black knobs under the EQ ones providing a rather unique sonic option: a White Noise Generator that can be blended in and equalized separately through a Tone control (a hi-pass filter).

The white noise sound can be set up to be triggered by the notes you play through the Env knob, which acts as a sensitivity threshold so that only your louder notes will trigger it.

Have a listen to the sounds of the Beautiful Noise Exploder in the videos below. We added it to our list of the Best Creative pedals of 2022.

EXPLODER is a highly expanded and modified version of the gain circuit from the WHEN THE SUN EXPLODES. A full-range distortion device with wildly more tone customisation options, and in a standalone pedalboard-friendly enclosure.

The gain circuit is a 3-way switchable hard-clipping pre-amplifier with 1000x gain amplification, running into an active 3-band EQ post-amplifier which can shape and sculpt your signal across the whole frequency spectrum, anything from gritty amp-like overdrives, to massively destructive fuzz tones.

An envelope controlled white noise generator (commonly used in analog synthesizers) can be blended into your signal which turns on and off with your instrument signal, which can add lo-fi sounds of cassette tape hiss, broken radio broadcasts, rainfall, or over-encumbering harsh washes of noise!

Gain: Turn up for distortion.

Sym: Even hard-clipping, which gets very compressed and fuzzy at high gain levels.

Off: Diode clipping is removed, the distortion heard is the op-amps overloading far beyond its limits. (Warning: will produce buzzing, noise, and potentially harmful amp exploding levels of gain).

Asym: Uneven hard-clipping, harsh and nasally, a mixture between symmetrical and no clipping.