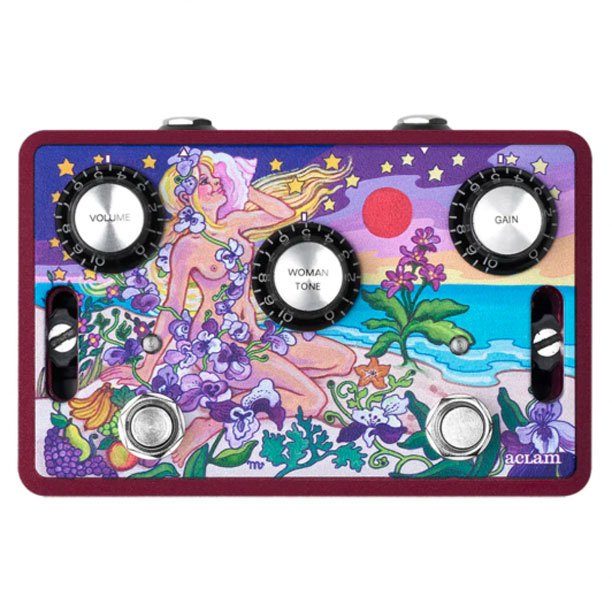 Despite the best efforts of the man himself, the cult of Clapton is still going strong and Barcelona-based Aclam guitars have created a pedal tribute to his “woman tone” from the 1960s.

The Woman tone was basically Clapton rolling back the tone control on his SG or Les Paul to get a muffly, fuzzy sound through a Marshall amp. The pedal combines a Plexi-style overdrive with a humbucker pickup simulator to achieve this. The second footswitch bypasses the woman tone control for two different tonal voicings. For the artwork, Aclam enlisted Marijke Koger, the painter of Clapton’s “The Fool” SG.

In London 1968 in the middle of the psychedelic boom era, Cream, the supergroup formed by Eric Clapton, Jack Bruce and Ginger Baker performed their last concert at the Royal Albert Hall before their dissolution, giving the best of the most symbolic shows ever!

WHAT DOES IT DO?
The Woman Tone effect pedal recreates the tone Eric Clapton’s was known for during his Cream days. Slowhand, a nickname that can be quickly recognizable by guitarists, described it as a “Sweet sound” in an interview during the farewell gig at the Royal Albert Hall, he said “It’s more like a human voice than a guitar. You wouldn’t think it was a guitar for the first few passages. It calls for the correct use of distortion.” After watching the documentary, we couldn’t help but feel inspired and amazed by the mastery behind it, so after some research we decided to challenge ourselves and create a replica of this sound, with an accurate approach to the unique tone he attained with a combination of his custom made Gibson SG and 100W Marshall ampli.

In result, we achieve a pedal with a meticulous and faithful reproduction of the legendary Woman Tone by simply pressing a switch! The Woman Tone in a box, as we like to call it, is a doorway to the Cream era and a truly playable pedal for any Clapton fanatic out there seeking his famous sound!

THE ARTWORK BEHIND
Since we wanted to pay the most close and extraordinary tribute to Cream both from the inside and out, we decided to reach out to the artist who painted the art on Eric Clapton’s The Fool guitar, a Gibson SG, which became a cultural icon in the history of guitars, and we got lucky enough to get Marijke Koger, former leader of the art collective The Fool (which the guitar takes its name) to design the artwork of The Woman Tone pedal.

Marijke’s amazing work illustrates the essence of the Woman Tone, she said, “I enjoy decorating the Woman Tone pedal very much, with the intent of capturing the same spirit as the guitar.” And we definitely think she did, portraying a human in paradise with very vivid colors and key elements that reflect the movement of the psychedelic youth culture in the 60’s and the inspiration behind the original Gibson owned by Clapton