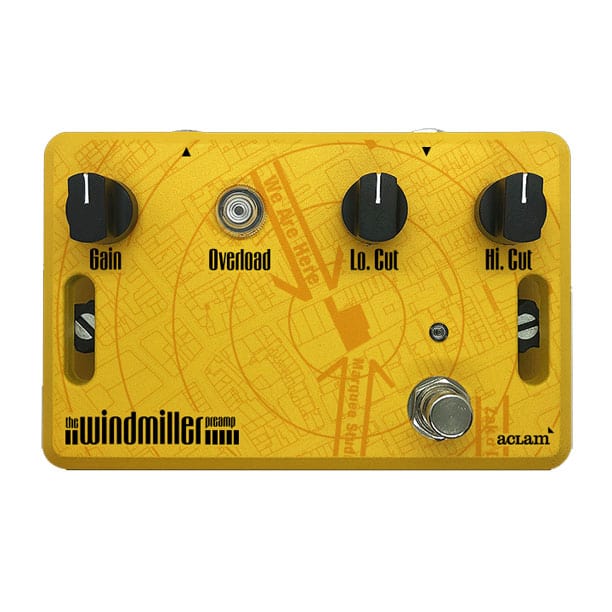 In 2019, Spanish boutique pedal builder Aclam surprised many with the release of the Dr. Robert Overdrive, a pedal inspired by the Normal channel of the Vox UL730, dear to the Beatles. At Believe in Music 2021 (the virtual event that’s replacing NAMM due to the COVID-19 pandemic) the company has unveiled a new stompbox that goes in the same direction by replicating the tone of a vintage amp used by legendary bands.

Enter the Aclam Windmiller Preamp, a compact stompbox with the tonal soul of a Grampian’s Type 636 Spring Reverb unit, which was used by Pete Townshend of The Who as a saturation tool, without any reverb, to crush the input of his Marshal amp (these two devices may have been the main causes of the guitarist’s problems with tinnitus and partial deafness, how lucky are we that we can get that same tone at any volume?).

The Aclam team was able to put their hands and ears on an original unit, and although they found it to sound really good with Marshall stack and single coils, they decided to create a device that could impart a similar character to any guitar/amp combination. They achieved this by extending the Windmiller’s frequency range and include eq controls while retaining its unique tone.

The treble response has been refined by adding a Hi-Cut control which allows you to add a sweet sparkle to muddy humbuckers or tame brighter single coils, as well as a Lo-Cut knob to better control the bass content…

If you are wondering about that Overload “thingy” in one of the knob spots, it’s an indicator lamp similar to the one found on the original Grampian 636, which is sensitive to your playing and responsive to your attack.

It all started on a lazy Sunday, surfing through YouTube looking for some old footage of The Who, when we stumbled on some clips of The Who playing at the Marquee Club in 1967. Despite the raw energy of those four young men, what really caught our attention was a weird device with a flashing light sitting on top of Pete Townshend’s Marshall amps.

After some research we found out that between ‘66 and ‘67, Pete Townshend had several Grampian 636 Spring Reverb units in his arsenal and he used them as a saturation tool, cranking his Marshall amps to the limit to get his groundbreaking tone.

So, we were really decided to create a pedal version of the 636 preamp but we had a slight problem, we had never tried one. So, in order to recreate it to the finest detail we began our search for an original unit that we could reverse engineer. After many months we managed to get our hands on an original Grampian unit! It was in a great shape and sounded amazing!

As soon as we strummed the first chords with the original 636, we found the combination of Grampian, old Marshall stack and single coils to be pure magic. It enhanced the amp’s natural saturation with a fatter, sweeter tone. This unique coloring comes out of its primitive technology and because of the low input impedance of the 636. This is also quite common on guitar effects of that era, like the Fuzz Face®, Range Master and many other 60’s effect units.

However, we felt the vintage 636 was less impressive when used with other types of amps and pickups, specially humbuckers. Because of that, we challenged ourselves to make this preamp sound beautiful no matter what amp or pickup you use, managing to eventually tweak the circuit to extend its frequency range and include eq controls while retaining its unique tone. The treble response has been refined by adding a Hi-Cut control which allows you to add a sweet sparkle to muddy humbuckers or tame brighter single coils, as well as a Lo-Cut knob to control bass content better, so the player can decide the tightness of the resultant tone.

Another thing we achieved was to refine its background noise. The vintage Grampian has a remarkable hiss, especially when the Aux Channel was used (Townshend’s choice). Chapter two of the Windmiller designing process was to eliminate that hiss whilst maintaining the character and behavior of the original Grampian 636 preamp. After experimenting with a great variety of components and fine-tuning the circuit to make it as quiet as possible, we finally succeeded!

And finally, in order to pay tribute to the last detail, we’ve included the overload indicator lamp found on the Grampian 636, which is sensitive to your playing and responsive to your attack, and you may agree with us, looks really cool!