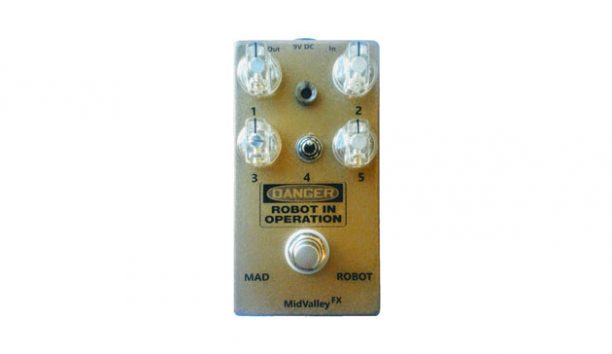 Comprised of a husband and wife team based in Albany, OR, MidValleyFx specializes in heavy fuzz and distortion pedals.

Their newest pedal Mad Robot, an oscillating distortion, was recently featured on Premier Guitar, and it’s bound to make noise lovers smile. Featuring 5 unnamed controls (four knobs and one toggle switch), this pedal is noisy even when you aren’t playing anything through it! This is due to the fact that it features an oscillator that plays a constant drone under (or on top of) whatever you play.

Mixed with the guitar tone, the drone (tunable through knob 4) can trigger some glitchy, 8 bit glissando scales, creating some unpredictable harmonics, and produces intriguing results in particular when tuned to the key of the song you are playing.

This is not the easiest pedal to describe with words, so we’ll let the video below give you an idea of each knob’s function, together with the manufacturer’s description, under it.

The Mad Robot is an oscillating octave up drone fuzz capable of everything from 8 bit tone eating robot malfunctioning sounds to lower gain octave up tones!

The number 4 switch, switches between Danger Robot in operation mode to a low gain to high gainish (depending on how hot your pickups are) octave up tone with no oscillations.

Knob 3 controls the attack/octave up and in oscillation mode when you turn it down it gets deeper creating for more glitchy 8 bit computer robot noises when you let notes ring out.

Knob 2 is the input/presence and increases the depth in oscillation mode when turn down and takes away some gain and presence as well in both modes.

Knob 1 is volume and its LOUD!