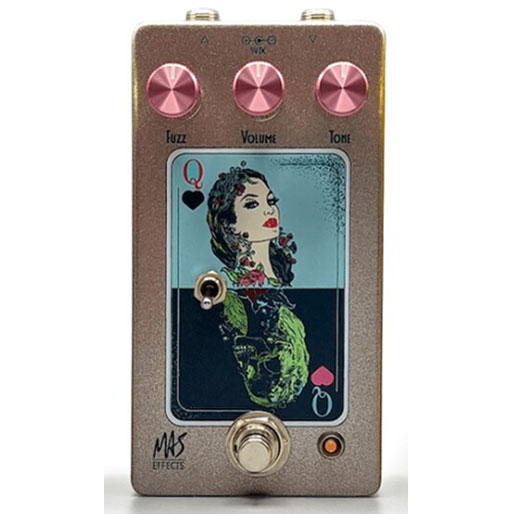 The Soma fuzz by Illinois-base MAS Effects is a high gain fuzz that’s more tweakable than it may appear at a first glance.

The three knobs deliver the standard fuzz control (Fuzz, Volume and Tone, with the latter being a hi-low shelf filter), but the Body switch can significantly change the fuzz’s personality, by fattening or thinning out the signal going into the pedal. However, either personality preserve the insane amount of gain on tap.

Two internal controls add extra versatility: a Fuzz Ceiling trim pot that allows you to tame the amount of gain to avoid extreme settings that make the pedal noisy. The other one is a Bias control that can be adjusted to give a gated, sputtery sound.

The soft footswitch also has a couple of tricks up its sleeve: you can hold it to temporarily bypass when engaged, or temporarily engage while bypassed.
Hold while connecting power to toggle whether the pedal will be engaged or bypassed whenever it’s powered on.

Check out the sound and videos of the MAS Effects Sona Fuzz in the demos below.

Extreme, High Gain Fuzz Pedal with a Touch of Class

Controls
Fuzz
Sets the amount of gain, distortion, fuzz, sustain, or whatever you want to call it. Like with most fuzz pedals, it will interact with the volume knob of your guitar. e.g. roll back the guitar volume at low FUZZ levels to clean up the signal considerably.
Volume
Controls the overall output of the pedal.
Tone
Pans between cutting highs or lows.
Body Switch
Fattens or thins out the signal going into the pedal.
Soft-touch Footswitch
Tap to switch between true bypass and engaged; Hold to temporarily bypass when engaged, or temporarily engage while bypassed.
Hold while connecting power to toggle whether the pedal will be engaged or bypassed whenever it’s powered on.

Internal Controls
FUZZ Ceiling
Need MORE gain? This pedal has insane amounts of gain on tap, but a lot of people expect to be able to turn the knobs any which way (and all the way up) and have it sound great. This isn’t unreasonable, but it’s limiting. If you max out the gain, the pedal gets really noisy! So inside, on the lower right, is a blue and white trimmer that tames it.
Bias
Can be adjusted to give a gated, sputtery sound.