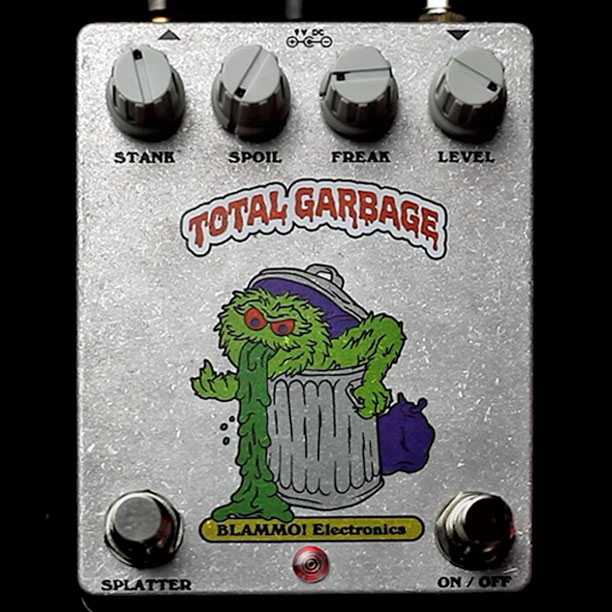 A device conceived for the truly devoted fuzz connoisseurs, the BLAMMO! Electronics Total Garbage Fuzz is a circuit inspired by an old stompbox that has surged to cult status: Tim Escobedo’s Ugly Face.

This is a gnarly fuzz with a synthy tone thanks to the added envelop filter and octave-down circuits. The Blammo! team added a Splatter footswitch that – from what we understand based on the first video os the pedal – opens up the filter.

Apart from Level, the controls are nondescriptive – here’s what they do:

Stank: Sensitivity control that controls the amount of resonance applied to the fuzz, and it’s directly linked to the intensity of effect produced by the Splatter footswitch.

Spoil: A knob that controls the stability of the oscillations, ranging from smooth to randomly bleeping/gated.

Freak: A tone control that selects the frequency boosted by the Stank (resonance) control.

The BLAMMO! Electronics Total Garbage is a gnarly, synthy fuzz that traces its roots back to the legendary DIY circuit, Tim Escobedo’s Ugly Face, taking it a few steps further into the experimental realm while adding some modern, pedalboard-friendly upgrades. In this demo video I put the Total Garbage through its paces on both bass and guitar in a full band context, then I dig into the control set and let you hear the full range of ruckus this filthy bastard can generate.