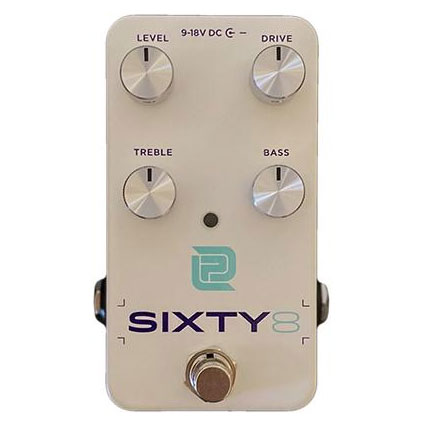 LPD Pedals is an Arizona-based builder that seems to have a keen interest in the sound of Marshall Plexi amps, since five out of six of their releases are pedals recreating different flavors of that legendary tone – while the sixth is a delay.

The Sixty8, available also in a dual-channel Deluxe format with added boost, was designed to sound like the company owner’s own and beloved 1968 Plexi 12000 series:

I wanted something that would allow back-line players to enjoy having a nice M-style crunch channel to go with their F-style cleans.

The Sixty8 delivers that dynamic Plexi tone, with the signature sustain at relatively low distortion settings. The Gain knob activates a gradual high-pass filter at higher setting, cutting out some low-end for a tighter tone.

Hear the sound of the LPD Pedals Sixty8 Overdrive in the videos below. We added it to our list of Best Plexi-Style Pedals.

When I started designing the SIXTY8 Drive, I had a long list of goals I wanted to achieve. I wanted something that sounded and felt like my favorite 1968 Plexi 12000 series. I wanted something that would allow back-line players to enjoy having a nice M-style crunch channel to go with their F-style cleans. It had to be super low noise, completely natural note sustain and decay, free of any strange fizzy artifacts. Plus – it had to be highly versatile with a wide range of clean to heavily overdriven tones. It also had to be tour-worthy and durable.

So here it is – the SIXTY8. It’s incredibly dynamic, responds to the guitar volume control and your pick dynamics very well. It has a great amount of sustain without needing a ton of distortion/fuzz to get there. The Gain control also functions as a shelving EQ — as the gain increases, the low frequencies are attenuated slightly to keep your low end tight. The Bass control is pre-clipping and designed to offset the shelving filter on the Gain control. You can add back in all the low frequencies that the Gain control removes, so you can mold it to your rig. This also simulates the jumping or bridging of channels on the real amp, allowing you to mix in as much of the “Normal” channel as desired. It’s very snappy and responsive, and somewhat jangly, especially as the Treble is increased – which makes it great for rhythm stuff, and rhythm/lead hybrid styles.