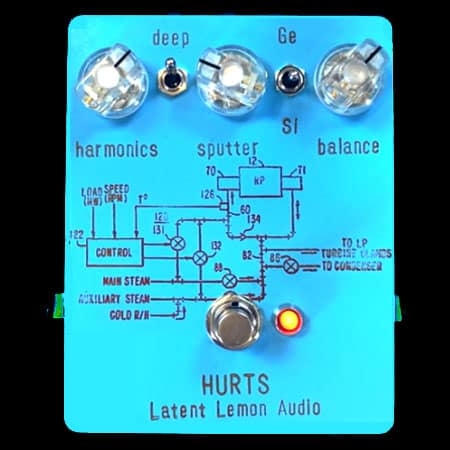 Based in Luton, UK, Latent Lemon is a boutique pedal builder laser-focused on building quality gain (and fuzz) devices.

Inspired by the tones of legendary noise rock producer Steve Albini, the company’s latest creation, simply named Hurts, is a take on the Germanium based Percolator fuzz, with added tone sculpting features, including a Diode toggle that switches to Silicone diodes, which are a little louder or, in the middle position, bypasses both diodes and hits instead a loud transistor booster, great for pushing your amp with a cleaner signal.

This version features also a Sputter knob that lets you alter the transistor bias so you can go from classic tones to more edgy and noisy ones, while the Deep toggle switch (a bass mod) is optional but only £10 extra for those who want it.

For the tinkerers, there’s also this:

Inside it has a couple of trimmers, one to tune in the octave “sweet spot” and one for gain compensation in case of oscillation.

The names of the controls may confuse some, so here’s the translation:

Check out the videos! We added the Latent Lemon Audio Hurts Fuzz V2 to our article about the best Harmonix Percolator Clones and Evolutions.

The new version of the Hurts – complete with Sputter control! This lets you alter the transistor bias so you can go from classic dad-rock tones to Mr Albini and beyond!

The infamous Harmonic Percolator circuit tuned for maximum tone. Capable of filthy sub octave and willful feedback, through to just a hint of grit, or an amp slamming transistor booster. Definitely more than just a fuzz.

As in the original HP-1 the Hurts uses both germanium and silicon transistors carefully selected and graded for both sound and gain. Inside it has a couple of trimmers, one to tune in the octave “sweet spot” and one for gain compensation in case of oscillation.

It uses 1N695 germanium diodes as in the original HP-1 and has a switch to change to silicon diodes which are slightly louder (my favourite on bass). In the mid position this switch bypasses the diodes making it a loud transistor booster that really pushes the front end of an amp. I have bought up the last of the best quality 1n695 diodes I can find, unlike the alternatives these germanium diodes bring out the octave effect whilst ensuring adequate output from the vintage pedal circuit.

I wanted a Harmonic Percolator that sounded something like Steve Albini’s, but couldn’t find the sub-octave throaty HP-1 sound I was looking for – especially after I luckily got to record an old 70s original Ed Giese built Interfax HP-1 which sounded amazing! Anyway, back in 2012, after more breadboard experimentation and research than is probably healthy, I came up with the Hurts pedal. Although I have now changed the name from 1000 Hurts to Hurts, it is still exactly the same circuit.

– Gain Compensation: It is recommended to leave this trimmer alone unless your pedal oscillates, in which case back it off slightly.