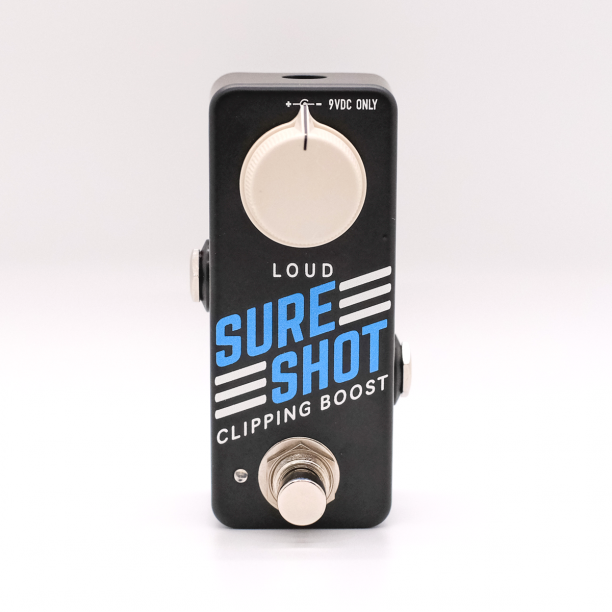 Boost pedals are, to the creative guitarist, the most boring pedal effect there is. Problem is, those guys don’t understand subtleties. But the new Greer Amps Sure Shot – the first pedal by the Athens-based company in mini format – is a one-knob boost pedal that’s not even that subtle anyway.

While the majority of boost pedals aim for transparency, cleanliness, and infinite headroom, the Sure Shot will push your amp into overdrive, and while at it, also push a pair of MA856 clipping diodes, creating what the builder describes as a “layered” drive effect in which both the amp and the pedal are beginning to overdrive.

It also works well in front of other boost, overdrive and distortion pedals, adding texture and juiciness.

Hear what the Greer Amps Sure Shot Clipping Boost does in the video below.

The sound of an amp, barely holding itself together is something to behold.  The tone of a good amp walking the knife edge between clean and drive…there’s something there that just doesn’t exist anywhere else, and when you push it just a bit further, you can truly find bliss.  That’s where the Sure Shot Clipping Boost comes in!

The Sure Shot Clipping Boost is a different kind of boost.  Is it high headroom? NO!  Is it Germanium?  Again, NOOOOPE!  This boost is designed to get dirty, but it does so in a very special way.  The Sure Shot has one single control on its face.  The LOUD control does just that, it makes you loud, but…it does it in a way that is unique amongst boosts.  As you increase the LOUD control, the Sure Shot will push your amp into overdrive, while it also pushes a pair of MA856 clipping diodes.  This results in a very special tone—a LAYERED drive effect, in which the amp AND the pedal are both beginning to overdrive.  Now, this alone is truly special…but wait…there’s more.  If you run this in front of your favorite boost, overdrive, distortion, or even a second Sure Shot, you’ll find that it adds texture and juiciness to those sounds.  The audio image of the Sure Shot is purposely rooted in the 1970’s, with some areas slightly peaked out, and some frequencies tamped down just a bit.  This audio image presents itself more as the LOUD knob is increased, and it is truly glorious. The Sure Shot works wonderfully with all genres of music, from spanky country music to heavy chugging metal.  I know this all sounds crazy…and maybe it is.  It’s a clipping boost…it clips…on purpose…and it sounds glorious when it does!

The Sure Shot is the first pedal from Greer Amps in the mini pedal format.  It features true-bypass switching, and runs off of 9 volts only.  We built this pedal with top tier components, and we are proud to offer this tiny little wonder to you.  The Sure Shot has a 5 year warranty on it, and as always, we stand behind our workmanship…you’re going to love the way you sound with the Sure Shot Clipping Boost.