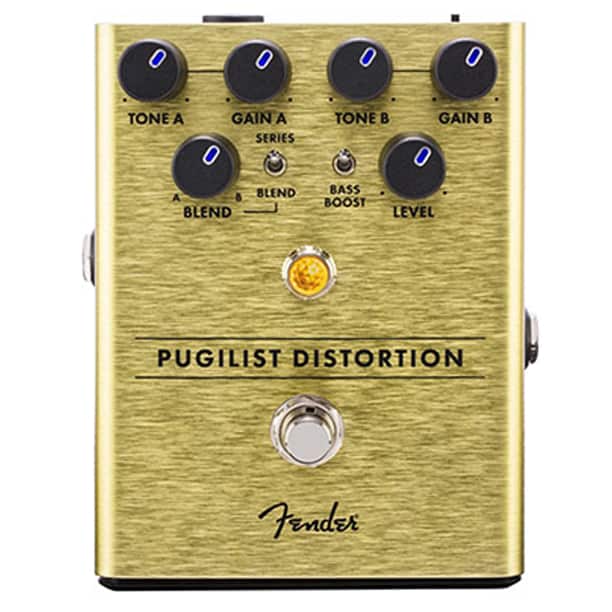 Fender caught the pedal world by surprise when it unveiled six new stompboxes at NAMM 2018. The Pugilist Distortion is the pedal that probably deserves the most attention out of that first batch of releases, being surprisingly affordable for a dual channel distortion pedal – one flexible enough to also deliver overdriven tones.

What’s interesting and different about this pedal is that the two channels, featuring separate Gain and Tone knobs can be mixed through a Blend knob, or can be stacked on top of each other in Series mode.

This opens up a world of tones rarely heard in a distortion pedal.

The two channels are not identical, with B sounding a little heavier than A. The parallel configuration offered by the Blend mode allows you to cook up a tone that’s at once rather distorted (via channel B), while dynamic, by mixing in some of the cleaner and maybe brighter version of your tone dialed in for Channel A.

When run in series, the distortion gets a lot thicker, since you get basically three cascading gain stages – and two tone knobs, which is rather unheard of!

The Bass Boost switch is another useful option to fatten up your tone when needed.

We like this pedal not only for its sound but for its price and versatility, although it shines at high gain distortion.

Here are a few more demos by other video-stompers:

This is the entire line: