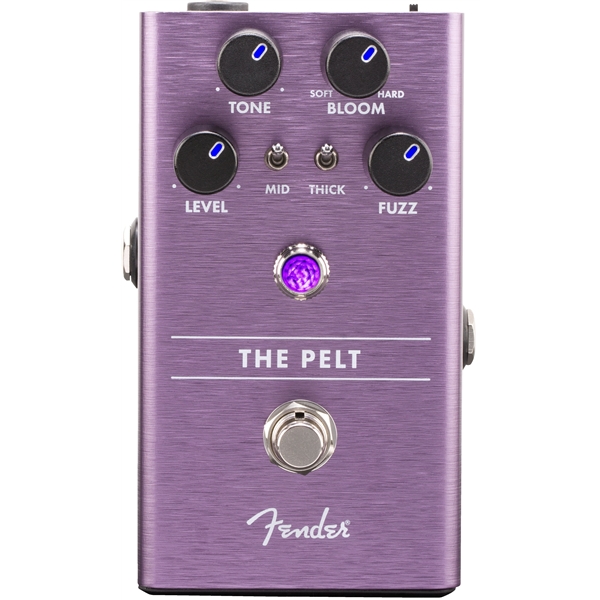 Fender’s Pelt Fuzz is a classic silicon fuzz with a series of added tonal controls: two toggle switches called Mid and Thick allow the player to boost the effect’s frequencies respectively in the mid and low range, while a more a classic Tone control knob deals with the overall brightness.

However, the most intriguing and mysterious knob on this pedal is called Bloom, which, according to the press material, “shapes the contours of your sound.”

Since we found that description a little vague, we asked Fender’s product specialist Chase Paul to tell us a little more… here is his reply:

The Bloom control affects the attack of the fuzz. When the control is turned counter-clockwise (towards the Soft label), the attack of The Pelt is smooth—almost like a classic germanium fuzz. As you turn the Bloom clockwise (towards the Hard side), the attack of the fuzz is squishier and more modern sounding. This pushes The Pelt into sounds we’ve come to expect from silicon transistor-based fuzz pedals—splattery and zippery.  Between the Bloom and Fuzz controls, players can dial in sounds ranging from small, bluesy amp-like breakup all the way to intense, thick wall-of-sound tones. –  Chase Paul

Check out the videos of the Fender Pelt Fuzz.

An all-original design, The Pelt Fuzz has a few tricks hidden up its sleeve. All the familiar controls are there: Level, Fuzz and Tone, along with a Bloom control to shape the contours of your sound. Our secret-weapon Mid switch lets you boost or cut the midrange for even more voicing options, while the Thick switch adds some girth to your sound.