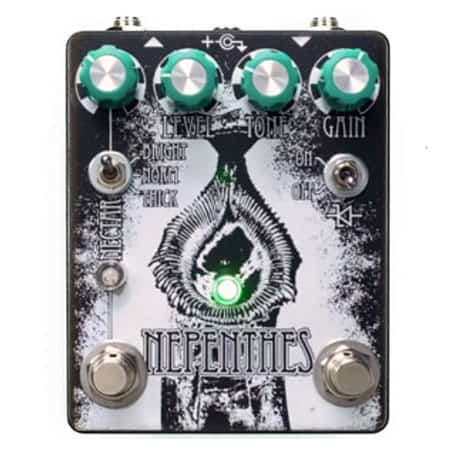 The Electrofood Nepenthes is a distortion pedal built around a custom discreet LM308 op-amp fine-tuned for a thicker mid-range and clangy high end defined high-end. It features a toggle switch that adds extra clipping and an extra boost stage that does this:

Nectar: This left-side footswitch changes the gain structure in one of two ways, selected through the Bright/Thick toggle. Bright boosts high-mids and treble, where Thick is a more flat/even boost, bringing up your low end to match the more prominent top end.

Version 2 adds a volume knob for the Boost and a new Normal/Flat Boost EQ mode.

Check out the video by Collector // Emitter, below.

Named for a genus of otherworldly carnivorous pitcher plants – known to feast on animals as large as rats – the NEPENTHES is our unhinged take on the traditional LM308 opamp distortion circuit. This pedal has been given the ELECTROFOODS mad scientist treatment – we dropped the LM308 like a rotten seed pod and purpose-built our own discrete opamp from the ground up to make the gnarliest distortion possible. We’ve also added optional extra clipping for increased compression and clarity, and a two-mode boost footswitch for when it’s time for that extra push over the cliff. The NEPENTHES is a ferocious beast with a luscious pool of sweet nectar at its heart – great for surgical shred tones, swampy doom filth, and everything in between. We hope you love it as much as we do.

CONTROLS
Gain: Pretty standard in its application – clockwise for more gain and heavier filth, counterclockwise for sparkle and definition.

Feedback Clipping Toggle: This toggle adds additional clipping, similar to what you’d find in that green pedal everyone seems to scream about. This will give you extra nastiness and compression, but without sacrificing clarity.

Nectar: The left-side footswitch and toggle work together; use the toggle to change the character of the Nectar boost (extra bright, thicker bass/low mids, or unchanged). Use the knob to dial in a volume boost or, past noon, drive the pedal into extra fits of distortion.

Level: Standard-issue volume control. This pedal has a lot of volume on tap – start low and dial upward until you reach