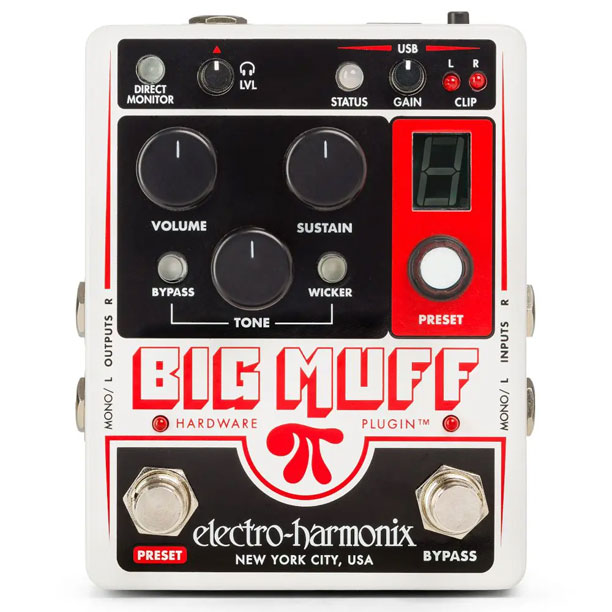 NYC’s Electro-Harmonix is known for pushing the pedal effect envelope, but their latest release is something else entirely: the Big Muff Pi Hardware Plugin is a software plugin that routes your DAW’s signal via USB to an analog Muff pedal that also acts as a controller and headphone monitor.

While the hardware (which boasts the circuit of the coveted 1973 Violet Ram’s Head) can be used as a standalone stereo (!!) fuzz, the plugin/device combo is compatible with all the major DAWs and can also function as a 2-in/2-out USB audio recording interface, which enables the user to record with or without the Big Muff effect engaged.

It also features some additions not found on other EHX Big Muffs, such as a 10 presets system, and two switches: Tone Bypass and Tone Wikcer, which opens up 3 high-frequency filters for extra top-end bite.

The Electro-Harmonix Big Muff Pi Hardware Plugin is also a controller: changes to the hardware’s knobs will be reflected on the DAW plugin and can be recorded in the DAW.

Check out the videos!

The Big Muff Pi® Hardware Plugin® is a new type of product that transcends the limitations of traditional DAW plugins to bring the unique qualities of analog sound to digital recording.

Analog hardware has a magical warmth that is beloved for its sound and feel. That was the genesis behind this product. Take the world’s most beloved harmonic distortion / sustainer and transform it into a plugin.

It works like a standard DAW plugin, but recorded tracks go through the actual analog circuitry of EHX’s Big Muff Pi, injecting analog warmth into your session. Of course, it integrates seamlessly with all the most popular DAWs like Pro Tools®, Ableton Live®, Cubase®, GarageBand®, Logic Pro X®, Reaper® and more.

Simply connect the Big Muff to your DAW by USB, select a track, and open the plug-in window. Instead of software emulation, you have real clipping diodes, overdriving transistors, and nature itself coloring your sound. The analog circuit is pushed over the edge and loses control. The sound you hear is the natural warmth of electromagnetic chaos.

The new Big Muff Pi Hardware Plugin can even function as a 2-in/2-out USB audio recording interface, which enables the user to record with or without the Big Muff effect engaged.

The Big Muff Pi Hardware Plugin can be used as a stand-alone pedal and shares the circuit design of the legendary 1973 Violet Ram’s Head Big Muff. That coveted pedal has set the standard for musical distortion and has been heard on countless classic recordings. It’s renowned for its unmistakable articulation and exceptional sustain, and now it’s has been updated to be true stereo. It also features Tone Wicker, Tone Bypass and presets. With the ability store up to ten footswitch-accessible presets on the pedal itself and as many as your computer can hold, it is truly a Big Muff Pi like no other!

Wailing solos. Crunchy rhythm. Fat drums. Thundering bass. Liven up just about any track or instrument in your mix. Not just for guitar players, the Big Muff Pi Hardware Plugin opens the universe of real analog circuitry to all digital recording artists and computer musicians!