Ekko Aero: a Pedal with remote, by Aalberg Audio 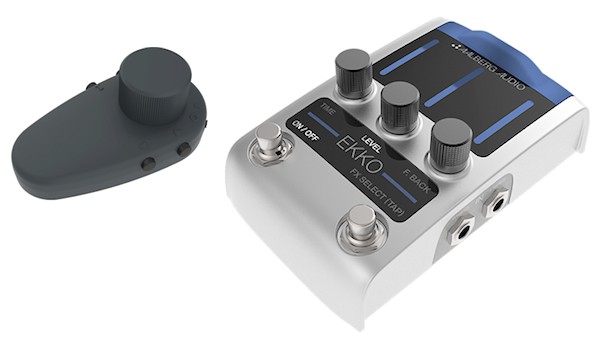 It’s a pretty common problem, especially for those of us who move around a bunch onstage: ever wish you could control your effects directly from the guitar body (or your body!) instead of being tied to your pedalboard? Sure, there have been various solutions over the years, usually made by tinkerers; Les Paul built his “Paulverizer“, which controlled various doodads offstage, Danny Gatton built his “Magic Dingus” box, which controlled his Echoplex, among other things, both hardwired boxes, with ingenious analog switching, yet tied to the effects via a direct connection. Although we’ve made incredible strides with ubiquitous digital effects found on many pro boards, somewhat surprisingly, there’s never really been a wireless pedal-controlling solution–until now. 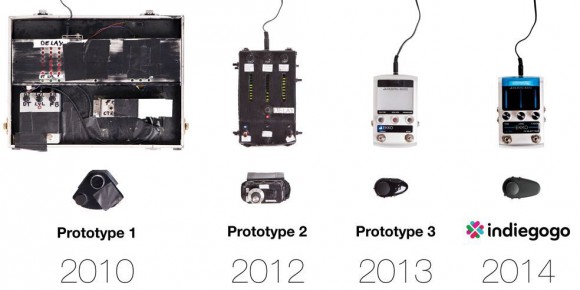 Aalberg Audio is a startup based out of Trondheim, Norway. In a classic Eureka monument, founder and namesake Rune Aalberg Alstad, a grad student at the time, came up with the idea for his Ekko Delay with Aero Wireless Controller while hitting the town with some pals and talking shop. A few rough drawings were followed by a few rough prototypes, and the world’s first wirelessly remote-controlled delay pedal was born. The prototype has been shown at Musikmesse and NAMM, and in just a few days, their crowdfunding campaign has reached 10% of their goal.

It’s a good-looking prototype — a small, wireless controller and utterly modern-looking pedal, which both look ready for mass production. It would be easy to mount the Aero unit–which controls all parameters of the corresponding Ekko delay unit, including tap tempo, time and feedback, along with the ability to preset favorites–to either a guitar’s treble horn, or to clip it to a wireless strap pack or belt. (Shoegaze folks might have a few less neck injuries from bending down to adjust their DD-3s… hurrah!)

In demonstrations, it appears to work seamlessly, and if the determination of Alstad (who presented the unit and corresponding theory to help earn his master’s degree) is any indication, this may very well revolutionize the way pedals are used. Limitations that I can see of course are that the controller unit is tied to the proprietary effect pedal, but the sound of the Aalberg Ekko is completely hi-fi, and the company promises all of its future effects will be compatible with the controller unit they are producing. I could see this type of unit working especially well with Univibe-style effects, or any time-based unit, frankly. I’ll be interested to see the next boxes they come up with, and if they can license the technology to other digital units in the future. At $249 to get in on the ground floor through their Indiegogo campaign– the price of many comparable hi-fi delay units — it’s not a bad gamble. The future is, apparently, now. – Mya Byrne

Mya Adriene Byrne is a multi-instrumentalist, poet, and award-winning singer-songwriter. She released her debut solo LP in the fall of 2012 and is currently mixing her second full-length record. Find Mya online at www.myabyrne.com or @myadriene.