Based out of Durham, NC, Dusky Electronics is a relatively new manufacturer of pedals, amplifiers and speaker cabinets – incidentally, their D?O amp looks absolutely delicious and won Premier Guitar’s “Premier Gear” label in 2016. But we ain’t interested in amps over here, pedals only (or “petals” like our terrible intern from a couple of years ago used to spell that word – how adorable!).

Dusky is currently offering three stompboxes, and you won’t be surprised to hear they all belong to the gain realm: a boost (aptly named More Me), a drive (of the Toasted kind) and an octave fuzz (named Octomotron). The three effects belong to the “no frills” category, featuring – in two cases out of three – just one knob. The one with three (Toasted Drive) configures them in rather intriguing, interactive ways – more about this later.

In the pedals’ description, the manufacturer also avoids referencing classic effects as inspiration, in one case (the Octomotron) also stating that it was “designed without reference to a particular pedal or circuit.”

In a few words, here’s what each pedal does –  to hear/see the video demo, click on the gallery’s images.

More Me: single stage clean(ish) boost with a midrange emphasis.

Toasted Drive: based on a pair of cascaded MOSFET gain stages, it goes  from clean boost to medium gain, amp-like overdrive. The Temperature knob adds harmonics to the signal, while the More knob can push your (actual) amp into overdrive. Color knob emphasizes the high frequencies of the Temperature effect.

Octomotron: brash and synthy take on the octave fuzz. One knob for output and one toggle switch for added bass boost. Works well on bass too. 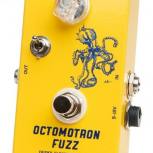 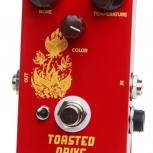 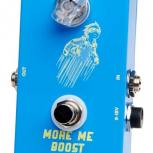