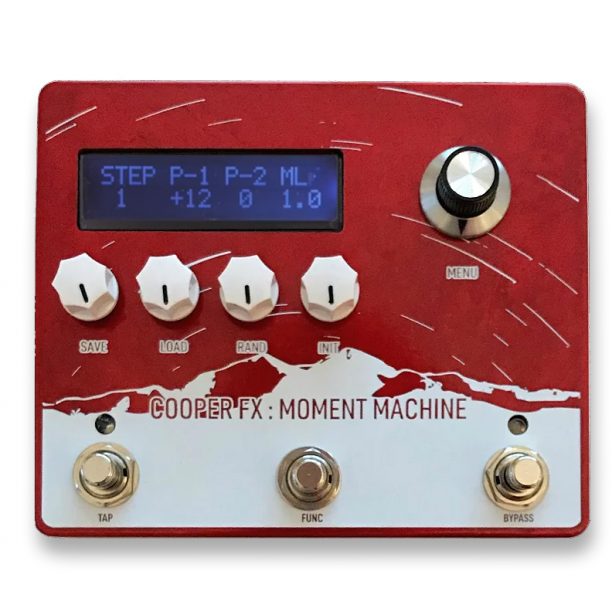 Pitch shifting is one of those effects that, when used in non-subtle ways, can open up a wide palette of creative possibilities, which seems to be the precise mission behind the effect circuits of stompbox maker Cooper FX.

…the most tweakable pitch shifter available in hardware form.

It’s already out of stock.

Featuring two independent polyphonic pitch shifting engines, a sixteen step sequencer, and over two hundred user adjustable parameters, this baby is nothing short than a synth with an input jack instead of an oscillator – it can mangle your signal live or after sampling it. Or rather, it samples it while you are playing live.

Access to the device’s many features is addressed through screen-based navigation controlled via five knobs, while the three footswitches deal with Tap Tempo, Function and On/Off duties.

Notwithstanding its streamlined look, this is a complex device, and since the manufacturer doesn’t list the pedal’s features we’ll let Knobs do the heavy work of showing you what it can do:

The Moment Machine at its core, is one of the most tweakable pitch shifters available in hardware form. Featuring two independent polyphonic pitch shifting engines, a powerful sixteen step sequencer, and over two hundred user adjustable parameters, there is plenty of room to get lost in the pedal, however it’s easy to use due to a simple and intuitive graphical user interface.