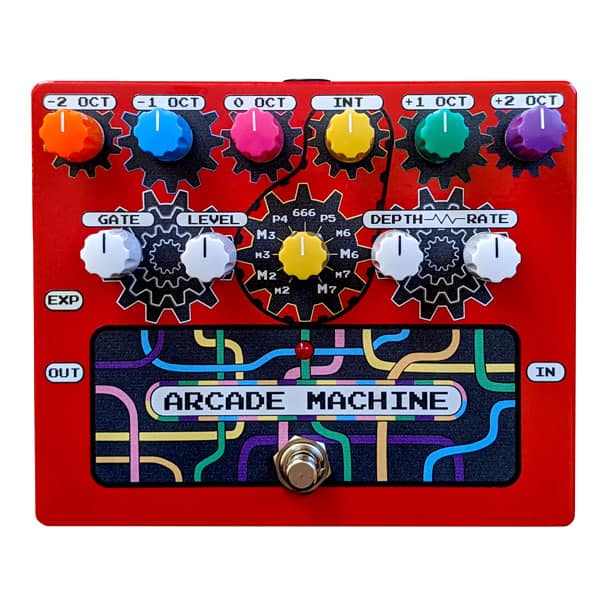 PLL-Style pedals have become quite trendy after EarthQuaker Devices came out with their Data Corrupter in 2017, but we haven’t seen anything yet quite like the brand new RPS Effects Arcade Machine. With its playful approach inspired to vintage arcade video-games, this colorful pedal re-synthesizes your instrument as a square wave and then gives you the option to harmonize that synthy tone with up to four octaves and an extra tone in intervals from a full 12-tone scale – while the other PLL circuits on the market are normally limited to octaves and, sometimes, fifths.

The interval range can be control via expression pedal or control voltage (CV), and a sequencer can be used to run through a series of notes that will automatically follow your playing, allowing you to program in anything from simple trills to arpeggios to full melodies. A vibrato effect can also be applied at the end of the chain, controlled by the Depth and Rate knobs.

Here are the videos of the RPS Effects Arcade Machine.

The Arcade Machine by RPS Effects is a PLL-based analog synth / harmonizer. It latches onto your input frequency and re-synthesizes it as a square wave, which in and of itself produces a rich, rounded synth tone. But that’s only the beginning… one and two octaves down, one and two octaves up, plus an interval of your choosing are all at your disposal, essentially resulting in a 6-voice synthesizer that you can control with your instrument.

As far as we know, this is the ONLY analog harmonizer out there that can give all of the intervals in a 12-tone scale. With an expression pedal input that takes over the interval selection, also accepting control voltage (CV), the true potential of having all those notes can be unlocked. A sequencer can be used to run through a series of notes that will automatically follow your playing, allowing you to program in anything from simple trills to arpeggios to full melodies.

Vibrato is also available, which acts on all of the voices. It has controls for Depth and Rate, spanning the range from subtle pitch variation to full-on glitched-out computer sounds.

Like all PLL-based effects, the Arcade Machine is monophonic, meaning it only works (well) with one note at a time on the input. As for the ‘tracking’ of that note, the controls were made as user-friendly as possible, with just a single knob, Gate, determining the sensitivity.

If you’re ready to enter a world of fat bass, sawing mids, and laser beam trebles – welcome to the Machine.