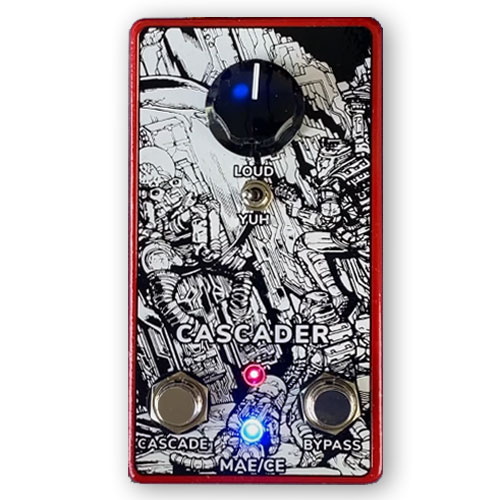 The Cascader is the second collaborative pedal by pedal YouTuber collector//emitter and Mask Audio (after the Part Garden Dual Fuzz).

This is an aggressive fuzz inspired by Devi Ever and EHX circuits, combining a smooth fuzz with a low gain gated fuzz to conjure a dense yet tight mix of fuzz and distortion. The left footswitch activates an additional fuzz circuit at the beginning of the chain, taking things into extreme fuzz territory.

A second collaboration between Mask Audio Electronics and Collector//Emitter: Cascader

Cascader has its roots in the same time period as Part Garden. When we started collaborating, we had multiple ideas running at the same time. Eventually, Part Garden was released into the world and the other ideas went into the MAE archives. Earlier in 2021, we decided to revisit one of the earliest designs and breathe new life into it.

Cascader is not an updated or mini Part Garden. It is a whole new design favoring simplicity and classic tones.

As a one knob fuzz, Cascader is meant to be loud and aggressive. Inspired by Devi Ever and EHX fuzzes, we combined a smooth fuzz with a low gain gated fuzz to create a really tight mix of fuzz and distortion. Pressing the left footswitch brings in an additional fuzz at the beginning of the chain, overloading the other stages for an extremely saturated signal.

Note: Cascader has a lot of gain and is meant to be noisy. We have minimized this, especially when using humbuckers, but certain settings will hum. Embrace it. Turn it up. C A S C A D E

Controls:
Loud – Overall output volume of the fuzz
Yuh – Changes the amount of compression, selecting between open and gated voices
Cascade – Adds an additional fuzz at the beginning of the signal chain for more saturation and sustain