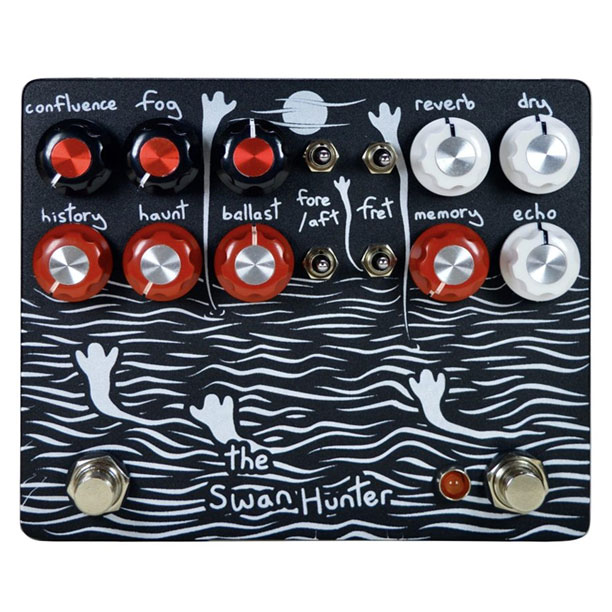 Blending layers of delay and reverb is the favorite hobby of a fair slice of guitarists into stompboxes, and – as you can see from our article about the Best Delay + Reverb Combo Pedals article – effects makers are fully aware of that.

Philly’s boutique builder Champion Leccy, run by an UK ex-pat named Woolly, has built the majority of its catalog of pedals targeting creative and experimental guitarists through an unusual blending of different effects,  and the new release The Swan Hunter promises to inspire many journeys into sonic bliss.

This is a very peculiar lofi echo and reverb based on a PT2399 and a Belton Brick chip. Woolly stumbled upon this idea while working on another pedal (the Skitter). integrating its reverb circuit with the delay from the Woozy.

The two effects interact in ways that aren’t immediately intuitive (they can be set in parallel or in series, or anywhere in between), but operating the mysteriously named knobs is bound to yield results that may vary from the unexpected to the inspiring – but pretty much always ambient. The delay gets grittier at longer settings, and the combination of low pass filters on both effects and borderline self-oscillation capabilities can create dark and spaced out tones.

For those interested in venturing through the complicated set of controls, here’s the description copied and pasted from the builder’s page:

confluence – Blends between putting the reverb in parallel or series with the echo. When in series the reverb is after the echo.

fog – Feedback control (this gives the reverb longer tails and around 3 o’clock puts it into oscillation territory.

brake/ break (left footswitch) – The second footswitch has two functions. When the confluence knob is fully anticlockwise (echo and reverb in parallel) it functions silently as a brake to slow down the oscillations from the fog control.

The second function (break) is lofi and noisy, and is related to the fore / aft, ballast and confluence controls (see below).

The break function of the second footswitch works in combination with fore / aft, ballast and confluence.

Pressing the footswitch will give you a lovely noisy lofi fuzzy grumble of some description depending on what’s happening with the other controls. It’s all highly interactive.

history – Delay time (analogue style). This sound is warm gritty lofi, repeats are straight. This control allows the delay time to be pushed beyond what the chip was designed to do, so it gets grittier and more lofi the longer you make the delay time.

haunt – Echo feedback (repeats). The feedback loop for the echo is designed to get to the brink of oscillation but never go too far over.

fore / aft (three way switch) – duck/ gate effect. Up (fore) means the echo can be heard whilst you play and then gates when you stop playing. Down (aft) means it gates when you’re playing and comes through when you stop. Middle position is off.

fret (three way switch) – Low pass filter switch. In the top position it lets everything through including all the noise and tape like hiss, the middle position cuts a bunch of that out, and the bottom position is for particularly warm repeats.

memory – Delay time (tape echo style). These are wibbly tape like repeats. Well, repeats might be a strong word. This control dictates the amount of wibble, so it can be combined with the history control to just add a little bit of character to otherwise steady repeats.

dry, reverb and echo each have their own volume controls (white knobs).

Here are the first videos of it!

The Swan Hunter is a lofi echo and reverb.

It uses the same delay chip as the Woozy (PT2399) and the same reverb as the Skitter (Belton brick). The basic reverb and echo voicings are fairly similar to those pedals but the functionality of the pedal is very different.

It isn’t a modulation pedal, there’s no LFO, but it does have some gritty tape echo sounds, haunting reverbs, gated echo and lofi noise to mess around with.

How did the design come about?

When I was breadboarding the Skitter (mid 2019) I had originally included a feedback control that would slowly allow the reverb to oscillate in the background as you played. I loved how the fed-back oscillating reverb would slowly amass. I then added a momentary footswitch to act as a brake to slow the oscillations from becoming overpowering. I know there are reverbs which have a second footswitch to get the reverb into oscillating territory. I thought it’d be cool to do it the other way round.

Anyway, that was the starting point for the whole thing. I had intended to release the Skitter at the beginning of 2020 and the Swan Hunter at the end, so 2020 would be a year bookended by reverbs, but everything (as we all know) went pear-shaped last year and most plans went out the window

Why is it called the Swan Hunter?

There’s many ways to design a pedal, from starting with and tweaking a known circuit, to chasing a specific sound, to exploring a theme or concept. The Swan Hunter kind of covers each of these three categories. I had the basic starting point from the Skitter circuit and I had that sound of the hanging reverb from experimenting on the breadboard. That initial sound of a slow building fog of echo was where the Swan Hunter concept came from and that’s how I went about developing the design.

As I’m sure many of you are aware by now I like to include local references from back home (North Tyneside in the north east of England) in my pedals, and just about every PCB has some words from a Geordie poet.

The North East was famous for two main industries: coal mining and shipbuilding. My great grandpa was a pattern maker (one of the people involved in the process of making moulds for ship parts), so there is also a family connection to shipbuilding. Most shipbuilding had shut down by 1979 shortly before I was born. I only know of two major shipbuilders on the Tyne: Vickers Armstrongs and Swan Hunter.

I can’t remember how the idea first came about but building from a conceptual theme was certainly something I’d never done, so I thought I’d give it a shot.

I wanted to create a haunting lofi haunting echo/ reverb that would hang like the ghosts of the long dead shipbuilding industry over the Tyne.

and yes, of course I know that sounds pretentious. It was just a vision I was aiming for. It was just a means to an end. And I got there, so let’s never speak of it again.

In terms of the name, I like things that have two layers of meaning and ‘the Swan Hunter’ as an abstract seemed like such a poetic name, so I went with it. Because not many of you out there will have ever heard of the ship builders and get that reference, erm, until now.

What is going on inside the pedal?

There’s some feedback and routing allowing long tails and slow building feedback and oscillations. There’s also a few ways to control the levels and keep them from taking over (fore / aft and ballast controls and the second footswitch).

The echo side has an fx loop for its feedback loop, so you can put whatever you like in there.