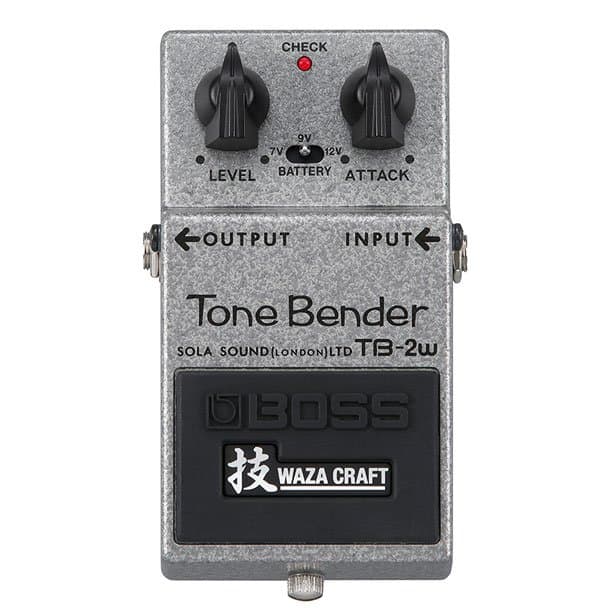 The Tone Bender, introduced to the musical instrument market by Sola Sound in 1965, is a fuzz pedal that made the history of Rock’n’Roll and is now incredibly rare and abundantly cloned. It was one of the first fuzz circuits ever produced and intended as the British answer to the American Maestro Fuzz-Tone. Its three-transistor circuit became one of the staples vintage fuzz designs to inspire almost all the following pedals in that niche.

The Tone Bender was developed in several versions after its appearance, with MkII gradually gaining the favor of most fuzz geeks, which, needless to say, made it become extremely rare.

Those who are interested in that legendary tone at a fraction of the cost and within a more compact and reliable stompbox will be happy to learn that  Japanese pedal builder BOSS unveiled a Tone Bender pedal within their Waza series developed in collaboration with Sola Sound, the TB-2W.

The TB-2W was created using as a reference a “masterpiece” Tone Bender MK II (serial number 500) from Sola Sound’s archive. Available in a limited production run, it’s based on a circuit featuring

The three-way voltage selector is particularly intriguing, allowing for a more compressed or dynamic sound.

Here are the videos of the BOSS TB-2W, we added this pedal to our article about the Best Tone Bender-Inspired Fuzz Pedals.

BOSS and Sola Sound have come together to introduce the TB-2W Tone Bender, an authentic sonic recreation of the iconic Tone Bender MK II fuzz pedal used by some of the greatest guitarists of all time. Heard on legions of classic tracks from the 1960s through today, the Tone Bender’s bold, rich voice and smooth sustain are forever embedded in the annals of rock and pop music history.

Among the iconic fuzz pedals in music history, the Tone Bender is one of the most revered and unique. Embraced by many of the world’s greatest guitarists, the sound of this pedal is woven into the fabric of some of the most influential music created over the last five-plus decades. Under the Sola Sound brand, Macari’s Musical Instruments in London produced numerous variations starting in the mid-1960s, and many consider the “MK II” version to be the ultimate Tone Bender voice.

When BOSS and Sola Sound first discussed collaborating on a Tone Bender MK II pedal in 2017, we realized there would be many technical challenges in achieving our goal. Foremost among them was sourcing the rare and vitally important germanium transistors at the heart of the circuit. Other problems included power supply considerations and resistance to environmental changes, which would be key to realizing both authentic Tone Bender sound and BOSS’s strict performance standards.

Working through one challenge after another, we were able to overcome them all with no compromise through dogged determination and careful attention to the finest details. While BOSS and Sola Sound have totally different histories, both companies have always strived to achieve the very best in tone. The TB-2W embodies our shared passions, bringing you Sola Sound’s famous rock voice coupled with BOSS’s committed craftsmanship and legendary spirit of innovation.