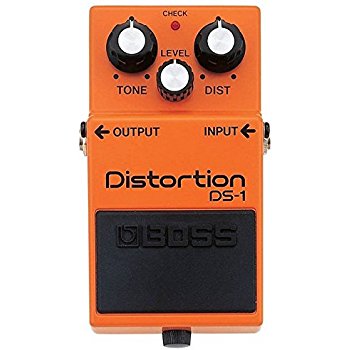 Released back in 1978, the BOSS DS-1 is one of those affordable, evergreen classics that have withstood the test of time. It covers your distortion basics and beyond through a simple 3-knob control layout.

The interaction of the Level and Dist knobs can deliver a wide variety of distortions – a lot more distortion than a Tube Screamer, that’s why it’s a distortion and not an overdrive! – while the Tone knob can make your guitar cut through during a solo or tame the highs for rhythm sections.

Metal guitarists will be glad to hear that it can get distorted and bassy enough to “chug” as Ola Anglund demonstrates in this video. But, admittedly, there are lots of better pedals for that musical genre.

After over 40 years, the DS-1 is still an incredibly popular pedal even among superstar guitarists (both Curt Cobain and Prince loved it, among many others) but it seems to have become something of a “love it or hate it” item among guitarists, with some declaring it’s the best pedal distortion ever made, and others simply not getting it.

This is probably due to the fact that it’s not precisely a pedal made for blues or warm/dynamic tones, and works best when fed into a quality tube amp on the edge of breakup, adding extra overtones and clipping. It’s also known for not sounding good with active pickups because of its low input headroom.

However, spending some time with it, experimenting with the knobs and using different amps – like the folks from That Pedal Show did in this video – reveals a surprisingly relevant and great-sounding circuit that shines at producing edgy distortion, but still has ample sonic range, with a price that makes it ideal for pretty much anyone, in particular young guitarists on a shoestring budget.

Interestingly, the BOSS DS-1 is also one of the most modded pedals: you can still find second-hand “altered” versions of this circuit by top-notch brands like AnalogMan, Keeley and JHS Pedals – some selling for a pretty penny!

By the way, more than ONE AND A HALF MILLION copies of this pedals were sold since 1978. That must mean something.

We added it to our article about the best distortion pedals, check out the videos of it, below.

USED BY PROS EVERYWHERE
The classic DS-1 Distortion pedal provides a harder distortion effect for guitar and keyboard sounds. Instead of toneless, fuzzy distortion, the DS-1 faithfully reproduces all the subtle nuances of playing dynamics–at any volume.