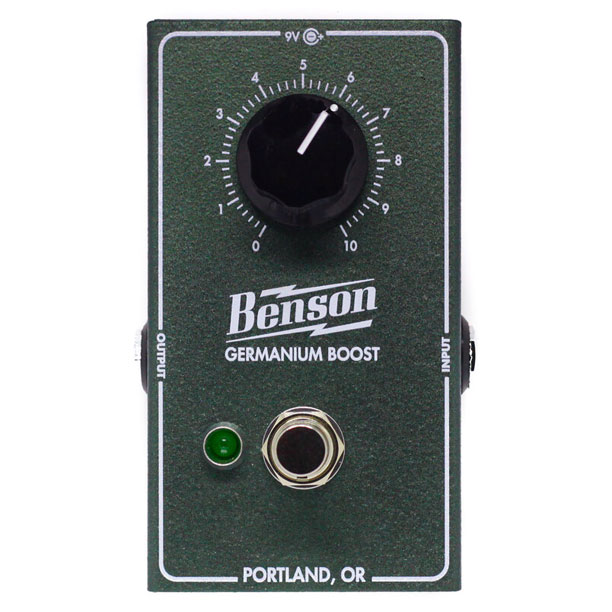 Out-of-the-box thinking can lead to more than one ideas or discoveries. Chris at Benson Amps stumbled upon the circuit for the new Germanium Boost while working on his temperature-controlled Face Fuzz clone, also Germanium-based.

Both pedals deliver uniquely consistent performance thanks to different ways to address the same issue: the sensitivity of Germanium transistors. In the case of the clean boost, the circuit designer devised a voltage-controlled error-correction circuit that compensates for any variation in performance.

The result is a clean germanium clean boost free from the artifacts that were previously associated with this kind of device, including… temperature sensitivity, drift, and suboptimal input impedance and headroom.

Check out the sound of the Benson Germanium Boost, in the videos below.

When designing the temperature controlled fuzz, we tried some unusual approaches. One false start utilized a voltage controlled error correction circuit to bias a single germanium transistor. It ultimately didn’t work for the fuzz, which is comically sensitive to transistor gain attributes.

We did find a place for it though.

It turns out it was PERFECT for achieving a germanium clean boost that, (like our fuzz) is impervious to component drift, leakage, and temperature….moreso in fact. We also fixed a couple other issues preventing the germanium transistor from being used as a convinc- ing linear boost…we increased the input headroom (even a normal guitar signal will drive a germanium transistor into unwanted input distortion without some tweaks) and increased the input impedance (a BJT transistor would normally thin out bass frequencies and interact negatively with whatever flows into it).

The result is a germanium clean boost that can utilize a germanium transistor WITHOUT the weird artifacts that were previously accepted as part of the deal…temperature sensitivity, drift, and suboptimal input impedance and headroom.

After the boost is first powered up, it takes about ten seconds before the error correction circuit correctly biases the germanium transistor After this things get interesting….we can hear how having the boost engaged makes guitar signals sound more musical…even when set at the same volume as the bypassed tone. Notes are given a simultaneously smoother and more detailed character, like a compressor but different. Some people we’ve shown it to have noted that it appears to deemphasize the unwanted parts of a signal and enhance the good. It’s killer on bass. It helps acoustic guitar pickups sound more natural. And of course it’ll push your amp into a frenzy.