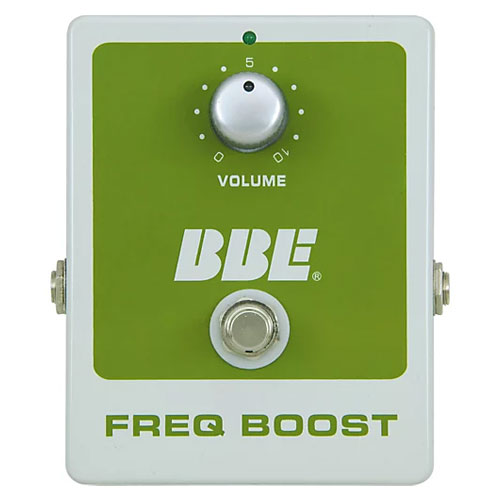 The now discontinued BBE Freq Boost is an interesting proposition for the vintage crowd: How far will you go to recreate the sound of the 1960s and 1970s? First a little background: The Freq Boost is a treble booster, which is essentially a precursor to the now-ubiquitous overdrive pedal. Guitarists like Eric Clapton, Ritchie Blackmore and Brian May all used treble boosters to make dark-sounding Britrock amps cut through the mix. As the name “treble booster” suggests, these pedals turbo-charge the mid and treble frequencies to push tube amps into overdrive. Make no mistake: The Freq Boost is a good treble booster. The pedal retails for $99, which is a lot of money for a pedal with a super-simple circuit and one knob, but you can feel the quality. However, the sound is an acquired taste to say the least. The Freq Boost seems to love or hate certain amps; there’s no in-between. Run it between a Gibson Las Paul Standard and a Fender Pro Jr. and crank the Freq Boost and you’re solidly in Clapton-era Blues Breakers territory. Do the same with a Fender Bassman and it’s like banshees shooting red-hot darts directly into your ears.

Bear in mind these pedals aren’t necessarily designed with a solo artist in mind. Used as a volume boost for solos using a Gibson Marauder through a Fender Hotrod Deville in a loud, five-piece rock band the Freq Boost certainly chimes—in fact, you can hear every note. Just don’t let the band drop out while you’re in full wail. The bottom line is that this pedal thrives in two very specific settings—through small tube amps with small speakers at low volume and as an occasional volume boost in a distortion-saturated rock band. Trying to find a middle ground is a masochist’s game. – Howard Stock