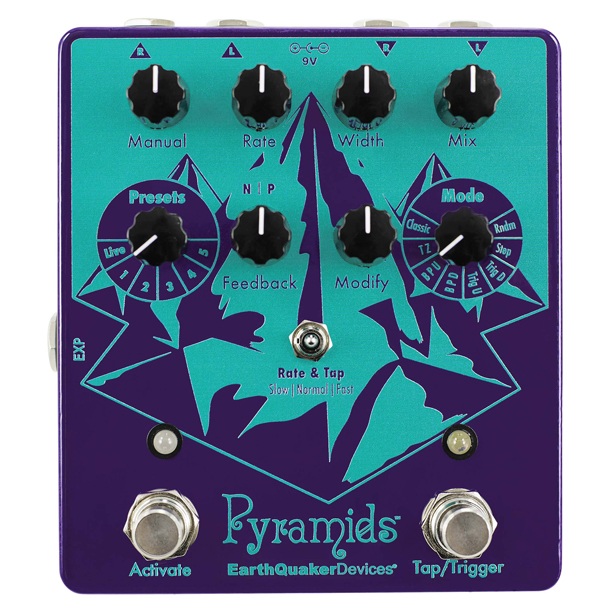 Built on the same proprietary digital signal processing (DSP) architecture as the company’s hit Avalanche Run delay and reverb pedal, Pyramids is packed with features and a full palette of great sounds. It has eight flanger modes, tap tempo, tap subdivision via the Rate & Tap mini-toggle, a multifunction Modify control, positive and negative Feedback, and—something you rarely find on a flanger—a variable Mix control that lets you set the volume of the effect relative to your dry signal.

Other features include a Tap/Trigger footswitch and an Activate footswitch with the company’s exclusive Flexi-Switch technology. This true-bypass switching platform allows for both momentary and latching operation, making it easy to engage the effect or use it momentarily for individual notes or phrases.

And with stereo inputs and outputs, Pyramids allows flexible signal routing for a range of guitar setups and as well as keyboards.

Here are a few videos of the pedals by popular pedal videographers:

• Barber Pole Up: An infinitely upward-sweeping flanging effect with no discernible beginning, middle or end

• Barber Pole Down: The same, with a downward sweep

• Trigger Up: An infinitely upward-sweeping flanger that restarts with each new pick attack or by pressing the Tap/Trigger footswitch

• Trigger Down: The same, with a downward sweep

Note: The Trigger Up/Down modes allow for Side Chain Flanging, in which an external control source (such as a drum machine, sequencer or control voltages) can be used to trigger the flanger while you play your instrument.

• Step: Sweeps up and down in stepped increments, producing a rhythmic flange effect similar to a synthesizer’s arpeggiator or sequencer

• Random: Sweeps up and down in random intervals, creating a chaotic flange effect similar to a synthesizer’s or envelope filter’s “sample & hold” function

In addition, Pyramids has controls for Manual (sets the delay time and resulting pitch of the modulated signal, and can also be controlled via foot pedal or control voltage source), Rate (flanging speed), Width (frequency range of the flange sweep), Mix (volume control for the effect) and Feedback (regeneration of the modulated signal). The Feedback has positive and negative control, with a center detent for zero feedback. Increasing the control past center creates a lush “whooshing” effect; decreasing it from noon produces a hollow, tubular sound.

The Modify control has a different function for each of the Pyramid’s eight modes. In Classic and the two Barber Pole modes, it’s a tone control. In Through-Zero, it sets the point where the through-zero point occurs, which is where you’ll hear the most drastic cancellation of the effect. In Trigger Up and Trigger Down modes, it sets sensitivity to control how quickly the effect reacts to your pick attack. In the Step and Random modes, it adjusts the glide between the steps: low settings produce strong transitions between steps, and high settings introduce a smoother glissando effect.

The Presets control lets you choose from your five saved presets. Moving the switch to Live makes the pedal’s current settings active.

Finally, there is a Rate & Tap toggle switch that can divide and multiply the tempo you tap. In Normal (center position), the rate is the same as what you tap. In Slow (left position), the tempo is divided for a slower rate, and in Fast (right) it’s multiplied for a faster sweep.

Pyramids sells for $299 MAP and comes with a 9-volt DV power supply. Check out the video below to learn more about it.

Here are a few more videos of the Pyramids: