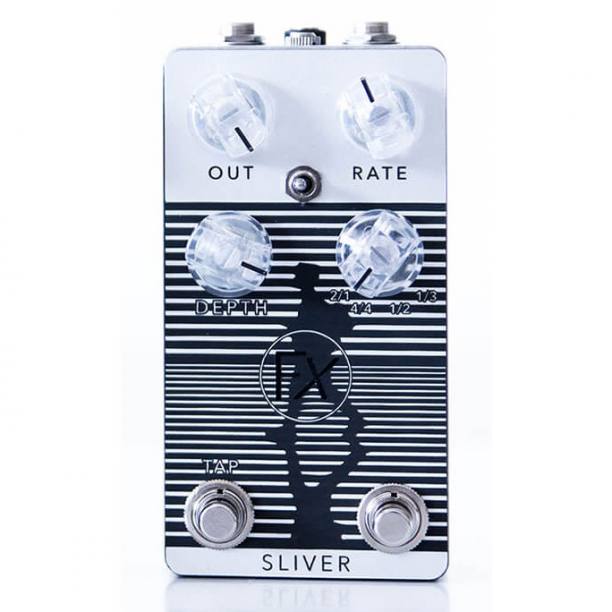 The Anasounds | TREMOLO (previously known as “Sliver”) is an optical tremolo with sinus, triangle and square LFO options that can also be purchased in a DIY kit. It’s a pedal that looks simple, but that’s actually packed with functions.

It features all the classic controls you’ll expect in a tremolo apart from the rate knob, because everything is done through the Tap Tempo footswitch, which also a trigger self-oscillation momentary effect if held for more than 500ms, and Killswitch functionality (both momentary and Killswitch mode).

The On/Off footswitch also features some alternative functions, with the Trimpot mode activated when held for more than 2 seconds.  This will change the knobs the following ways:

• DEPTH becomes FREE_SUBDIVISION, to fine-tune the timing of the wave.

• RATE becomes SYMMETRY, which allows to edit the shape of the LFO wave

Just like its harmonic brother Ages, with which it shares all of the above functions,  its rate can be controlled through Anasounds’ manual “fidget spinner” gadget called Spinner.

Four internal trimpots let you fine-tune the saturation of the modulating signal (bass and treble).

Check out the videos below.

From the lonely desert plains of spaghetti western
to the stuttering chopped-up notes of the most epileptic EDM,
tremolo is everywhere.
That very simple effect can find its place in any context,
no matter which style you’re playing or what the rest of your rig is.

To put it in the simplest terms,
tremolo is a cyclical volume variation
from the original volume to a decreased version
(all the way to the extreme version of the effect
which completely cuts the sound in a rhythmic fashion)
following a set tempo.

Up to that point, Anasounds had not come up with a tremolo yet,
since we were waiting to get a design that would justify
bringing a new tremolo into an already saturated market.

Until now, you could get more from your pedals
by adding a tap tempo footswitch or an expression pedal.
Truthfully, what was called an expression pedal
was more of a control pedal that would have the exact same effect
as turning a knob with your foot.
Very handy obviously, but not too creative.

With the introduction of the Spinner,
here comes the first expression pedal worthy of the name.

For the first time we’re using a microcontroller in one of our pedals.
However, we’re not making any compromise sound-wise, your signal path remains 100% analog.
That new element gives us infinite possibilities when it comes to sound and settings.
For example, that new pedal’s footswitches have several functions.
Therefore, you may interact with them via short or long pushes.
We also have pushed the trimpots concept to its maximum with hidden settings.
You may access additional settings by keeping the bypass footswitch pressed, such as hidden LFOs.
This is what we call the Trimpot mode.