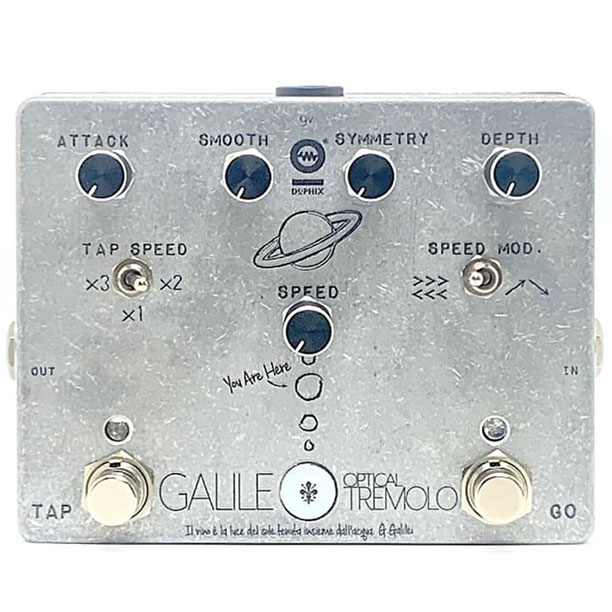 Those of you who enjoy the trembling nature of tremolo and revel in experimenting with LFO shapes should take a look at the new Dophix Galileo.

A full analog device, this Italian optical tremolo features a host of versatile features that allow the creative player to fine-tune the effect’s behavior in all possible ways.

Besides the usual knobs for Speed (which can also be entered via Tap Tempo) and Depth, there are other intriguing knobs to explore:

Attack: It delays slightly the beginning of the effect so that the initial notes aren’t lost if they are hit when the tremolo is at its lowest volume in the LFO cycle.

Smooth: This control makes the LFO wave smoother or harder, making it square at minimum settings and sine at maximum ones, with an infinite number of in-between shapes.

Symmetry: It changes the shape of the waveform in asymmetric ways, creating extra LFO variations.

Speed Mod: This toggle switch triggers three modes in which the speed is applied to the tremolo’s LFO.

Check out the trembly tricks this pedal can pull off in the video below.

Galileo is a full analogue optical tremolo with versatile regulations, tap tempo and modulation controls. The heart of Galileo is an internal analogue oscillator that controls an high quality photodiode producing the tremolo: the activation and de-activation of this match let Galileo’s tremolo effect be very natural without distortion of the input signal.

Galileo is provided with two true-bypass footswitches: GO and TAP.

With GO footswitch Galileo activate the tremolo effect and the output signal is modulated by the photodiode and the oscillator. When GO is on, a blue led lights on as a feedback. When GO footswitch is OFF the input is bypassed, so that the input signal is directly connected with the output jack.
With TAP footswitch it is possible to set the tremolo oscillator period as desidered by pressing TAP. Each TAP trigger set the start/stop of the oscillator period. A minimum of two tap triggers are required in order to set the desidered TAP period. No upper TAP triggers limits have to be respected. NOTE: the max oscillator period is 1 second: in case a longer TAP is requested the internal circuit will limit the TAP period to 1 sec.
Knobs:

Galileo is provided with five knobs that let you fully control the analogue oscillator and the tremolo effect as desidered.

Galileo pedal is provided with a dedicated led status indication that let the user understand the pedal status. Galileo comes with two leds on top of the footswitches GO and TAP.

GO LED is blue and has two possible states:
OFF: the Galileo pedal is OFF and the input signal is bypassed to the output
ON: the Galileo pedal is active and the output signal is modulated by Galileo’s tremolo oscillator-photodiode
TAP LED has four possible states. It always blinks at the current oscillator speed, no matter what the GO footswtich is ON or OFF. This let you be always able to monitor the oscillator speed, even when the GO footswitch is OFF and Galileo is in bypass mode. The TAP led blinks on the following four LED status:
BLU: the tremolo oscillator is running on MANUAL mode: the oscillator speed has not been set by TAP tempo and the speed has been manually set from SPEED knob (this is the default condition at power-on)
RED: the analogue oscillator’s circuit is attaching to the TAP tempo. When a TAP tempo is inserted with the footswitch, the oscillator needs to analogically match the oscillaotor speed to the new TAP speed: during the attach time the LED blinks red.
GREEN: when oscillator speed is perfectly matched to the new TAP speed the TAP LED blinks GREEN. On this status you can always check the oscillaor speed and the TAP status, no matter the GO footswitch state is OFF or ON.
GREEN+RED: Galileo is performing a SPEED MODULATION (details described on next “Selectors” section)
Selectors