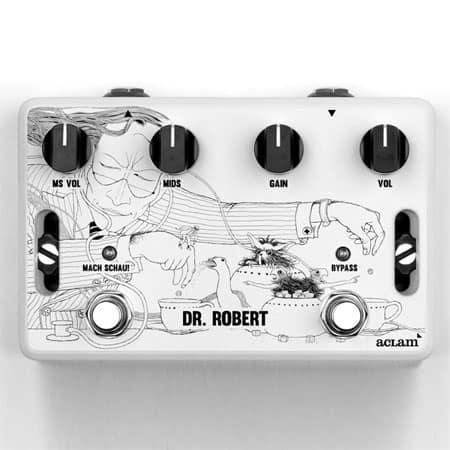 In a market as saturated as the one for overdrive pedals, you need something special to make an impression, and Aclam’s brand new Dr. Robert charms your senses right off the bat with its Beatlesesque name and look (the company enlisted Klaus Voormann, the artist of the Revolver artwork, for the pedal’s graphics).

Of course, these references have a reason: the pedal is a very faithful recreation of the Normal channel of the Vox UL730, used by the Beatles for many of their unforgettable recordings. The Spanish company owns one of the few original units of that vintage amp (S/N: 3042) and used it as a reference during the Dr. Robert’s design, employing a custom FET saturation engine to mimic the attributes of the amp’s tube power amp section. 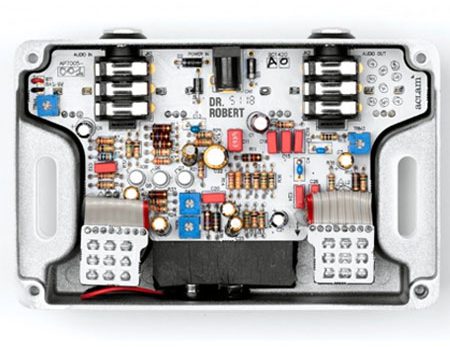 The Vox UL730 had a very particular mid range that would allow you to control both the midrange and the overal saturation of the amp, which is accurately recreated in this overdrive. The second footswitch engages a saturation boost named “Mach Schau” (German for “more show” something Beatles fans used to scream during their Hamburg experience), whose amount of volume can be controlled through the MS Vol knob and which allows the player to take the volume to the next level for solos or when your guitar needs to stand out in a thicker chorus.

This really seems like a standout pedal (Premier Guitar agrees), check it out in the videos below or – if you live in the LA area – come to try it in person at the Los Angeles Stompbox Exhibit on September 28-29!

The Dr. Robert is a guitar overdrive pedal based on the Normal channel of our Vox® UL730 S/N: 3042. This amp in a box pedal was designed to be the closest replica of the amp’s soul and character. A meticulous process of tracing the original tag board circuits and measuring each component’s value has resulted in a sonic approach never reached before.

One of the keys of this amp in a box pedal tone is the “Middle” control which is one of the most interesting mid-range eq ever found on an amp. From subtracting mid-frequencies creating a scooped sound, to adding them to build up the sound in gain; tailoring the “Middle” knob will allow you to control both the midrange and saturation of this amp in a box pedal. As the solid-state preamp of the UL730 doesn’t create much distortion by itself, it has been coupled with a custom FET saturation engine to mimic the attributes of the tube power amp section.

This amp in a box pedal will also allow you to add saturation to your main sound using the “Mach Schau!” section of the guitar overdrive pedal, with an independent volume control to swap between rhythmic and solo tones.