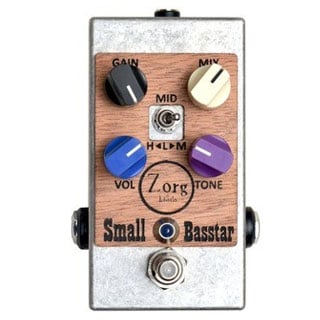 Originally built as a smaller/simpler version of this beast of a pedal, the (French) Zorg Effects Small Basstar is a peculiar overdrive obviously intended for bass but also intriguing-sounding on guitar. The circuit also gained its own quirks during the designing process.

The controls are pretty self explanatory, the toggle switch in the middle changes the color of the tone by changing the bass and treble EQ.

Check out this video demo with both bass and guitar by The SuperFunAwesomeHappyTime Pedal Show!

At the beginning I simplified the fabulous Glorious Basstar. But after simplification, I added tiny things to differentiate it from her big sister. The result is a bluffing, beautiful and versatile overdrive which will contempt bass AND guitar players.

Because this mini version reveals itself a real Dr Jekyll and M. Hyde!

For bass players (Mr Jeckyl): precision, gnarl, huge gain, big sound and superb attack clarity. All the essence of the Glorious basstar has been kept. But this tiny version allows for finer crunchs. The distortion color is also a bit different: either MOSFET for a medium very dynamic distortion or diode+Led for a deeper, more compressed voicing (see owner’s manual).

For guitar players (Dr Hyde): contrary to the bass, plugging a guitar into a Small Basstar, gives sweet vintage sounds from clean to lead, with fine crunchs and stoner in between. The mix button allows to blend the distorted sound with the clean bass and attack from the guitar, allowing for smooth sounds with a very defined attack. We flirt with the centaur (But in far better because there’s x1000 of gain) and we remember young Carlos Santana…