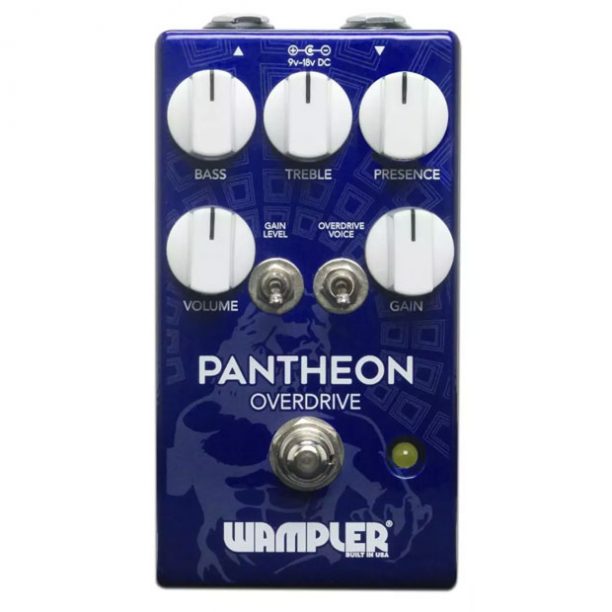 There always a lot of curiosity when Wampler unveils a new overdrive, since the Indiana-based builder has built a super-solid reputation for its gain pedals, through a series of popular models like the Sovereign Distortion and the Tumnus overdrive.

The company’s new pedal, called Pantheon, is a circuit voiced after the ultra-transparent vintage Marshall Bluesbreaker Stompbox, a stompbox modeled after the homonym amp, often associated with the British blues-rock of the mid-sixties, and dear to artists like Eric Clapton and John Mayall (whose band at the time was not coincidentally called “the Bluesbreakers”).

Besides delivering that sound, the Pantheon includes a series of tone sculpting and cab matching features that allow optimization for any amp or ear, including Bass/Treble knobs, a presence control , a 3-way Gain Level switch and a 3-position Overdrive Voice switch lets you choose between hard and soft clipping or a mix of both.

The Wampler Pantheon Overdrive Pedal was inspired by the long-discontinued, long-sought-after Marshall Bluesbreaker Stompbox…. and the many now – legendary pedals that have followed its ”transparent” path. The Wampler Pantheon gives you all the unmistakably British break up and tonal nuance found in the best of these revered circuits…. But with some fresh features and modern functionality which are all WAMPLER;

If you’re looking for a Classically Inspired Drive Pedal that mates perfectly with any rig, plays nice with all your modern tone-tools, retains all the personality and feel of your playing, AND delivers everything from sweet and creamy push to cranked British Grind….. Go Pantheon.

More of You
The reason the original BluesBreaker circuit is so legendary, and why so many cool stompboxes have been modeled after it, has to do with the way it introduces harmonics and grit into the tone you’ve already worked so hard to get, without altering it’s natural sound or drowning the player’s touch in needless extra compression or grit. The Pantheon takes faithful inspiration from this circuit, but keeps the sound entirely yours.

Always the Right Fit
The Pantheon gives you enough tonal tweaking options to enhance the rest of your rig without muddying things up. The Baxandall-style active bass control is neutral at noon but boasts an extremely powerful sweep as you move through the range. And in addition to the standard tone control, you’ll also find a presence control for adding just the right amount of top-end chime to fit your different guitars and output devices… live, in the studio, or as part of a larger chain.

Not just another Clone
This type of overdrive circuit is used in some very different ways by different players…. The native sound has passed the test of time, but Brian Wampler has added enough easily accessible gain control transport you through the decades at the flick of a switch. The 3-way Gain Level switch toggles between the most useful and usable Drive degrees, and the 3-position Overdrive Voice switch selects between hard and soft clipping or a mix of both! That’s every shade of dirt you’ll ever need.