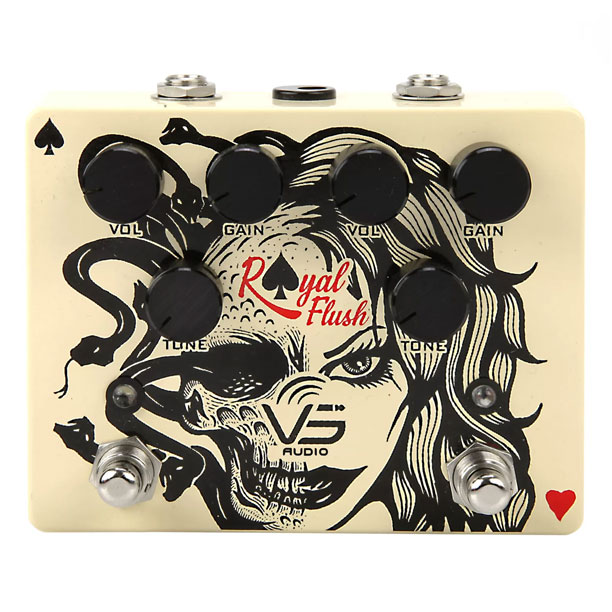 We entirely missed the VS Audio | Royal Flush Dual Overdrive because it was released in 2016, just before we started our daily coverage of pedal releases. But good things stick around for a while, and new videos of it refocused our attention on this very well-received device.

A dual overdrive with separate controls for each channel, the Royal Flush gives the players two separate sonic palettes that can be used separately or together to achieve a wide spectrum of overdriven, amp-like tones.

The first channel (left) is a low gain overdrive designed to simulate the “early break-up” of an amp without losing the clarity of your original signal. The second channel is a medium gain overdrive more prone to recreate the creamy and complex sound of a crunchy distorted amp.

When both channels are on, you can get the more aggressive sound of a cranked tube amp with extra sustain.

There’s also a limited edition Golden version of this pedal, released in early 2021.

Check out the videos of the VS Audio Royal Flush, even Rabea Massaad and Pete Thorn covered it, which speaks volumes!

Royal Flush is a dual channel overdrive with separate controls for each channel. The first channel is a low gain overdrive and is designed to create tube amp “early break-up” overdrive for rhythm tone with tone clarity. Second channel is a medium gain overdrive and is designed to capture creamy and rich sound of an amp-like distortion crunch. Both channels engaged emulate a more aggressive cranked tube amp sound with tons of sustain.