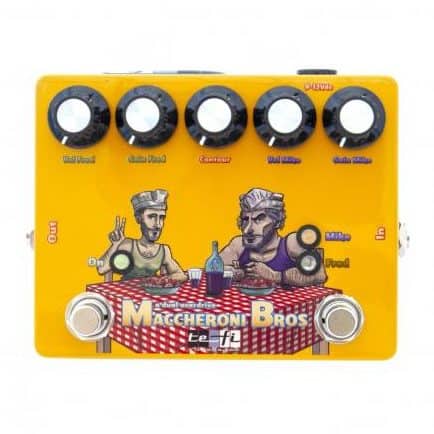 Finally, a pedal that allows us to remind Americans how to spell MACCHERONI properly – it’s not “macaroni,” folks!

Italian-based TEFI Vintage Lab stands out from the crowd of pedal makers because of their hilarious cases that depict Italian “characters” inspired by the tonal character of the pedals they ornate. Their devices are also gaining a good reputation because of their tone and – in some cases – features.

The Maccheroni Bros is a dual-channel overdrive with a cleaner and an angrier channel, therefore the illustration on the case shows up two very different dudes (Fred and Mike) having pasta (we don’t think maccheroni has a particular significance here, but we might be wrong!).

The two circuits have separate Volume and Gain knobs and can be alternated by pushing the right footswitch. A shared Contour knob affects the overall EQ of the pedal.

Fred, the ‘good’ brother is based on the proprietary PCN circuit and delivers a creamy sound and dynamic overdrive with sweet midrange sustain. Mike, the ‘indomitable’ brother, is based on a J-Fet stadium, combined with other circuit tricks and produces the kind of distortion produced by tube amps at high gain. It also produces sustain but more presence and attack.

Here’s the first video of the Tefi Vintage Lab Maccheroni. There’s also a version in black with just two pasta bowls on it.

Maccheroni Bros is an American-voiced dual overdrive consisting of two distinct circuits, designed to create a wide variety of modern versatile new sounds. The two channels are called Fred and Mike, both Italo-American bricklayers with very different personalities. Fred is lanky and placid, the ‘good’ brother. This channel is based on the proprietary PCN circuit finely calibrated to this role. It gives a creamy sound and dynamic overdrive with sweet midrange sustain that favors a Legato technique. Mike, stout and short-tempered, the ‘indomitable’ brother, produces the rock sound obtainable from a tube amp pulled at full throttle. This channel provides good sustain and presence with clear attack of every note played. Its circuit is based on a J-Fet stadium, combined with other circuits designed to obtain the best overall sonic performance.

The MKII version introduces enhancements on Mike circuit in terms of mid-high responce, always keeping its aggressivity. The pedal now can work also at 12VDC.

PRE-ORDERS start from 29 of July 2020. Reserve your Maccheroni Bros MKII by Reverb at discounted price of 233€; starting from 4 of July, the price will be 262€.