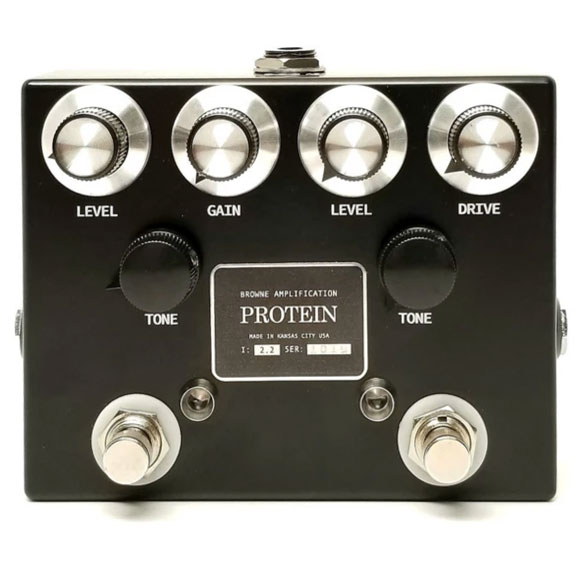 Kansas City’s Browne Amplification has been very busy hand-building pedals since the introduction of their Protein Dual Overdrive.

Designed in collaboration with guitarist/producer Adam Sniegowski with the goal of creating a dual overdrive that would sound great with any backline, the Protein features a Blue side inspired by the classic Bluesbreaker circuit (left) and a Green side voiced after the so-called “Nashville” overdrive sound, which implies it’s voiced after the Nobels ODR-1. Each side has its own on/off footswitch.

Both circuits were engineered to fix the limitations of the originals, improving on two already great things, and were tweaked to perfectly integrate with each other when stacked. Because of this, when both circuits are on (green into blue is the only possible order), you get added gain and fullness without compromising note clarity, something quite typical when stacking two drives on top of each other.

In the latest version of the pedal (2.2)  two dip switches inside the pedal allow you to split the two channels, allowing compatibility with a loop switcher like the RJM Mastermind.

The Browne Amplification Protein has gained several fans also on YouTube, as you can see from the videos below.

The Protein 2 in 1 Overdrive is a collaboration between David Brown and guitarist/producer Adam Sniegowski. After years on the road and in the studio using backline amps that could be very inconsistent, Adam came to Dave wanting to create a dual overdrive that would sound great with any backline he encountered. They started with two drives they loved, stacked well together, but had a few inherent issues. Dave set out to fix those issues without losing the soul of the originals.

The Blue Side is based on the classic OD used by the likes of John Mayer on the  “Continuum” album. Dave addressed issues like the lack of output, tweaked the tone control, and experimented to find what we think is our favorite version of this type of circuit while still being true to its roots.

The Green side was inspired by the classic “Nashville” overdrive.  This pedal has been used on the pedals boards of session greats from Tim Pierce to Jerry McPherson. We lowered the amount of gain (distortion) to make it usable through the entire sweep of the pedal, added some of the mids back to make it not quite so scooped, and eliminated some of the woofiness in the low end. This allows it to add some low mid “beef” back into your tone without becoming muddy.

The secret “third” channel of this pedal might be our favorite. When running the green side into the blue of this pedal, you get added gain and fullness without sacrificing note clarity or getting that “mushiness” that can happen while stacking some overdrives.

To use with a loop switcher like the RJM Mastermind ect.

The TRS plug on the input is going to act as the loop for the green side.

The TRS plug on the output is going to act as the loop for the blue side.

Tip is the input/send from your Loop

Ring is the output/return to your Loop.

There are two dip switches inside the pedal that need to be flipped down to the “split” position to use it this way. Remove the four screws from the back panel and flip the switches to the down position.