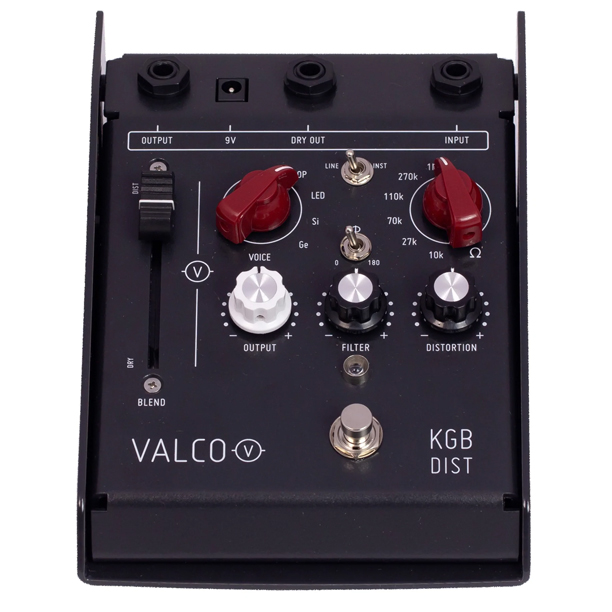 Valco, is arguably one of the most interesting pedal companies to emerge in the second decade of the new millennium, and the new Valco KGB DIST Distortion looks and sound like another device worthy of attention.

The second release in what we can now assume is a “KGB” pedal series (the first one being the KGB Fuzz), this distortion pedal mostly maintains the same control layout as is predecessor, with an added polarity reverse switch.

Designed to work with both instrument and line inputs (read: it works well also with synths and audio interfaces), the KGB is a tone-sculpting device that approaches tone sculpting in an “alternative” way. Emphasys here is given to the big red knob on the top right, named Impedance knob, and labeled with the Greek letter Omega. Varying the circuit’s impedance simultaneously affects the signal’s color and dynamics in interesting and complex ways even when the distortion circuit is off.

There is also a more traditional Tone knob to tweak the overall color of the signal, and also the Blend fader that reintroduces some of the clean signal to reintegrate some of the original tone and dynamics.

The other red knob (on the left) is a Multi-diode Distortion control allowing access to four separate circuits/voices using Op-Amp, LED, Silicon or Germanium diodes. Here’s a brief description of each mode provided by the builder:

Check out how the Valco KGB DIST Distortion sounds on guitar and synth in the videos below.

The Valco KGB DIST is a multi- function / tone-sculpting distortion machine, designed to work within a soundcreation chain or as a regular standalone distortion pedal (and everything in between!).

The KGB Series is designed specifically to work with K (keys, synths), G (guitar), and B (bass). The Variable Input Impedance works best with passive instruments (guitar / bass) and allows tone-sculpting with or without the distortion circuit engaged.

Lower settings yield softer dynamics / transients with a notable ‘rounded / vintage’ feel and tone. Higher settings give a sharper high frequency response with a more direct / aggressive transient feel and more perceived gain. This makes for a great ’shaping’ control, where you can tune the pedal for it’s best response to the pickups you are using and how you want them to react / feel.