True-Bypass or Buffer: Which Do You Need?

If you use several pedals in your signal chain, you’ve probably found that your guitar can sound muddy and lifeless. Guitarists refer to this as “tone suck,” the result of your signal passing through numerous circuits and cables as it makes its way to your amplifier.

For years, guitarists have turned to true-bypass effect pedals to help them combat the problem. The big selling point with true bypass is that it sends your signal from the pedal’s input jack straight to its output jack when the pedal is turned off. The pedal’s electronics are completely disconnected from the input signal. In pedals without true bypass, the signal moves through the pedal even when it’s not in use. This can reduce the signal’s high and/or mid frequencies, robbing your guitar of its desirable tonal qualities.

So true bypass solves the problem of tone suck, right? Wrong. It can help, but guitar pedals are only part of your signal chain. Cables are another.

Tone-Killing Cables
Guitar cables have something called capacitance. It’s formed whenever two electrical conductors are placed in close proximity, as they are in a guitar cable, which has a center core conductor and a screen conductor. Capacitance creates a low-pass filter effect that rolls off high frequencies. It’s not noticeable on short lengths of high-quality cable, but it can be very apparent with long cable lengths, especially with cheap cables.

Say you use a 15-foot cable between your guitar and pedalboard and another 15-foot length between it and your amp. If you use, for instance, seven pedals—not unlikely for most guitarists today—you probably have another six to 12 inches of cable between them. All together, that’s nearly 40 feet of wiring your guitar signal has to pass through before it reaches your amp. It’s safe to say that, even with high-quality cables, you’re going to have noticeable signal degradation.

Enter Buffers
This is where a buffer can help. A buffer is a small preamplifier that preserves your signal’s strength and tone. It essentially makes a copy of your signal and drops it from high impedance to low impedance. Buffers also achieve unity gain—put simply, their output level is equal to their input level. This can give your signal the boost it needs to travel on through even a long signal chain with no apparent loss in tone or volume level.

There are many stand-alone buffer pedals, including these units from Radial Engineering, JHS and Mesa/Boogie. 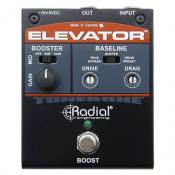 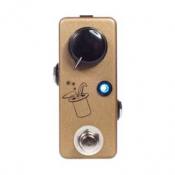 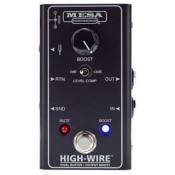 The good news is that many modern true-bypass and non-true-bypass pedals already have buffers in them, as do some pedalboards, like Friedman’s Tour Pro range. Some of these buffers are quite good and will do everything you need them to do. Some aren’t and will degrade your tone.

Do You Need a Buffer?
If you’re happy with your tone and setup, play on. Likewise, if you have one buffered pedal in your set-up that’s always on, you’re probably fine.

If you do decide you need a buffer, for best results have one good buffer pedal in your chain. You can place it in the front or at the end, or even in the middle. Bear in mind, some pedals won’t sound good with a buffer in front of them. For example, some vintage fuzz pedals don’t work well with a buffer’s low-impedance signal. You’ll have to experiment to see where you get the best results.

Want to find out more about true bypass, conductance and buffers? Check out this video from JustNickMusic. – Christopher Scapelliti