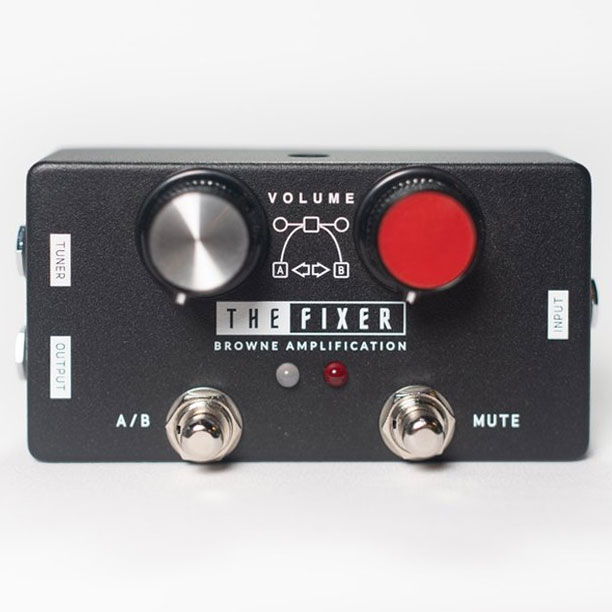 The Browne Amplification Fixer is a very simple but also very useful utility pedal/boost that aims at helping the pedal-obsessed fix a few common issues that arise when more than one electric guitar is used during a live performance.

Part buffer and part (double channel) clean booster, the Fixer allows to set two different boost volumes for your two instruments and easily switch them with the A/B footswitch to prevent volume changes. A Mute footswitch also allows you to prevent unwanted noises during the unplugging/plugging operations. Two LED lights of the same color as the respective boost volumes clearly indicate which channel is on.

The buffer in this pedal is also a central piece of the circuit, improving the overall sound of the board, delivering tighter lows and smoother highs while fixing any impedance issues.

The always-on Tuner output is an extra useful feature that rounds up the specs.

Check out the videos of the Browne Amplification Fixer below.

Every guitarist loves buying pedals, we can’t help it. Show us a flashy new pedal and we will sell a vital organ to make sure we can take it home. But, just like putting tires on your car, there are those supporting actors that are necessary for the leading roles to shine.

Enter THE FIXER. She’s not flashy and doesn’t need the spotlight or recognition, but she will make sure all your other pedals shine while making it easier for you to reach for that second guitar that you’ve been neglecting.

THE FIXER is part buffer, part booster, and all about how it makes your guitar feel. There are two different boost circuits. Why you may ask? How many times have you dialed in your tone to perfection and then reached for another guitar only to realize that the difference in output has changed how our drives and amp respond? FIXED. Need an always-on output for your tuner but also want a way to mute your signal chain to switch guitars? FIXED. Need a high-quality buffer to fix the impedance issues created by the dozens of guitar pedals on your board? FIXED.

After years on the road as a tech for some of the best guitarists out there, Dave realized the need for a pedal that would allow you to switch guitars without drastic changes in volume and tone. That’s why THE FIXER has two identical boosts. Not only do these boosts help to make up the slight gain loss from our favorite buffer but they also provide the option to add a bit more oomph to your signal if you so desire. Set your gain to perfection with your favorite humbucker guitar, then hit the mute switch, grab that vintage strat, boost the gain up to match your high output guitar and play on.

The unsung hero in this pedal, however, is the buffer. Buffers are tricky and opinions abound. A buffer can bring the life back to a long signal chain or thin out your tone and make it feel stiff. We made a buffer that we actually like and think you might too. Even if you aren’t getting fancy with the boosts, the buffer in this pedal will make your whole rig “feel” better. More responsive tighter lows, and smoother highs while fixing the impedance issues like a buffer should. You might even forget it’s there, but when you take it out, you’ll wonder what happened to your tone.