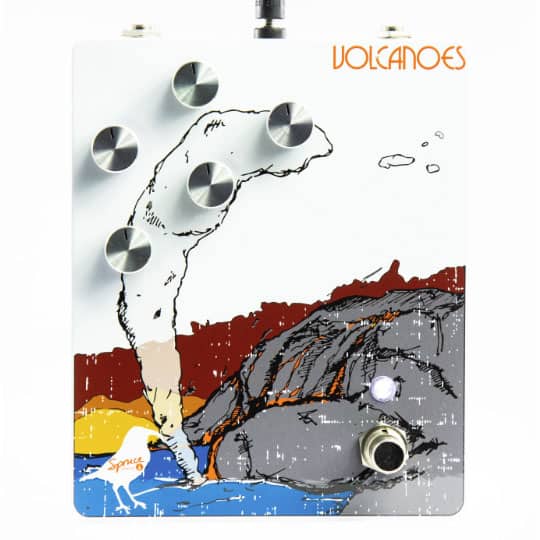 The newly release Spruce Effects Volcanoes is the Californian company’s 2nd pedal in the Americana Series, a collection of new, premium pedals dedicated to the US National Parks and that share specific technical details:

The Volcanoes is a fuzz that can deliver a wide range of tones through five knobs. Besides your regular Volume and Gain knobs (placed in the top row), this fuzz offers the following controls in the second row:

By working interactively with each other, these controls can produce fuzz tones from synthy to almost overdrive-like.

As the western-most National Park in the United States, Volcanoes is the second pedal in The Americana Series. This fuzz is a departure from the smooth and subtle Eastern cousin, Acadia. Although Volcanoes is nasty at heart, the Germanium input gain stage allows for a huge range of cleanup and dynamic low-gain tones.

First row of knobs (Northwestern most): Volume and Gain

All controls are incredibly interactive. Great tones are available at any setting, but after spending some time with it, you’ll really get things dialed in and find fun extremes and middle ground that work for your tastes and rig!