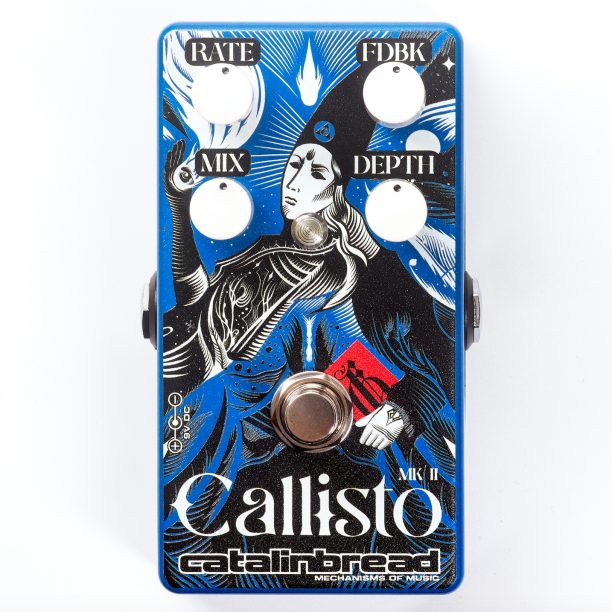 Catalinbread have released a new version of their Callisto, an analog BBD chorus with a feedback control that can blur the lines between chorus and flanger. In addition to the familiar chorus controls of rate and depth, the Callisto’s mix knob can go to 100% wet, resulting in triangle wave vibrato sounds. The updated artwork matches up with their recent phaser and overdrive releases.

After spending some time on the operating table, we are proud to release the Callisto MKII, back and better than ever. We’ve painstakingly recreated the robust engine of our original and added in some extra features, too. For starters, the Callisto MKII is still 100 percent analog just like the original for some classic trembling warmth you can really feel. Just how much wobble you want can be dialed in with the Mix control, which achieves 100 percent wet or dry in either direction. Turning it all the way up delivers a wonderfully-tuned pitch vibrato that can add some spice to your solos or some disorienting tape-like warble for your next bedroom pop record. Classic Rate and Depth controls go beyond the basic two-knob chorus and into hi-fi territory that makes your guitar shine and sound equally great for both lead and rhythm applications, or any other instrument you find may be lacking in thickness. We’ve also taken the liberty of adding a cool Feedback control, which dumps a varying amount of signal from the output of the BBD chip back into the circuit after the filtering occurs, for a striking regenerative tone that blurs the line between chorus and flanger, even if it never quite reaches the latter. You’ve heard guitar players argue for decades about whether Andy Summers played a chorus or a flanger, yeah? That sound and many others live inside the Callisto MKII within its intuitive set of controls.