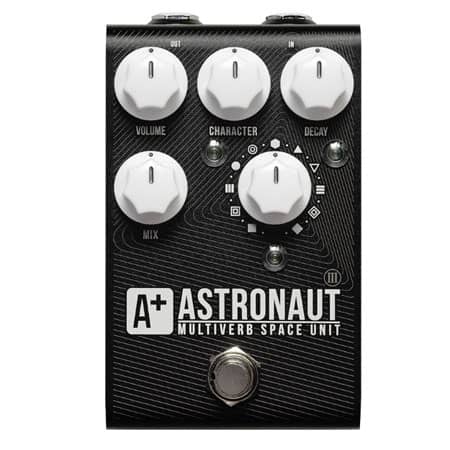 The A+ Astronaut is an intriguingly deep and surprisingly small reverb by Russian manufacturers Shift-Line, a company that’s been around for ten years and has built a cult-like following around the world.

The new V3, hosted in a slightly wider case, offers 22 different reverb, delay and sampling algorithms, compared to the 11 reverbs offered by the previous version.

The pedal’s most unique feature is that it can listen to your signal in bypass and play full and massive reverb tails immediately when switched on.  Sustain lovers will also want to try the infinite sustain mode.

This stompbox is featured in our all-encompassing list of Best Multi-Mode Reverb Pedals (in the compact/streamlined category).

The Astronaut III is more than just another reverb pedal. It is the third generation of an atmospheric powerhouse which boasts a rich tonal palette and a huge range of flavors: from traditional reverb algorithms to complex acoustic structures and arpeggios.

The pedal contains 22 varied algorithms — including extended versions of some from the Astronaut, Astronaut V.2 and Shift Line Force — as well as an infinite sustain mode (Infinity Mode). Among other nice features are top-mounted jacks, switchable tails, a soft bypass switch, and a full-range wet/dry mix with an option to go 100% wet. Just like the previous generations, the Astronaut III is flexible, easy to use, and very musical. With this inspiring device, crafting complex soundscapes is a breeze!

The CHARACTER knob controls an extra parameter depending on the selected algorithm. See the description below for more info.

All sounds are split into pairs and divided between two banks. Each bank holds 11 algorithms. Bank 1 contains the basic sound in each pair, Bank 2 holds its alternate version. Turn the PROGRAM knob to select an algorithm from Bank 1. Press and hold the bypass switch while turning the PROGRAM knob to access the sounds from Bank 2.

3. SkyNet 2 and 1 are spacious, futuristic reverbs with controllable DECAY. The CHARACTER knob provides mild low-pass filtering
4. ShimUp 2 and 1 are classic shimmers with different sound characteristics. For ShimUP-2, the CHARACTER knob is a resonant low-pass filter on reverb tails. In ShimUP, CHARACTER is a resonant low-pass filter for the octaver, set at the input
5. ShimUpDown combines the best parts of octave-up and octave-down shimmers with a few special ingredients. This algorithm works best for atmospheric, soundtrack-type music. The CHARACTER knob provides mild low-pass filtering
ShimDown is a reverb with a lower octave controlled by the CHARACTER knob. This algorithm creates a powerful atmospheric pad beneath the notes you play. It works equally well with guitars (particularly in the upper registers), 5-string basses, and synthesizers. Set the mix to 100% wet for a nice string pad
6. Universe M-2 and Universe M-1 are complex effects aimed at creating walls of sound. Sonically, they can turn your guitar into an organ going through rotary speakers, a reverb, and a mild flanger/phaser. The CHARACTER knob controls the rate of the flanger/phaser

In the Astronaut III, arpeggiators add random notes from a selected scale to the main sound. The rate of changing the notes is controlled by the CHARACTER knob. The resulting sound is then processed through a reverb for good measure.
7. Eva Maj Arp and Eva Min Arp add major and minor arpeggios to the main sound. These algorithms work best for single notes. Select the Major Arp for a dreamy, cheerful and inspiring tone, or choose the Minor Arp for a more solemn mood
8. Eva Octave Arp randomly goes through octaves and sounds good with chords. Eva Random Arp is quite unpredictable as it adds completely random intervals to the main sound

9. Cm-112 Step Filter is an unorthodox filter with nods to effects that have become staples in electronic music. The sound goes through the reverb first, then through the step filter with an additional internal filter. This algorithm allows for a wide range of sounds via just two knobs. CHARACTER controls the step changing rate, while DECAY controls the depth of the filter and the mix between the dry and filtered sound.
Mechanics Delay is a combination of short delay and longer reverb reflections for futuristic soundscapes
10. Ping-Pong is a delay with repeats alternating between forward and reverse. DECAY controls feedback, CHARACTER controls delay time
Reverse Delay is a delay with reverse repeats. It works great for ambient music but can fit into rock equally well. DECAY controls feedback, CHARACTER controls delay time
11. Force Roar and Force OctDn are differently voiced freeze reverb algorithms from the Shift Line Force. The bypass switch has several functions:

The DECAY knob is inactive. CHARACTER controls a resonant low-pass filter that can dramatically change the sound

Press and hold the bypass switch for more than 0.3 seconds to enter Infinity Mode which simulates turning the DECAY knob to the max. In this mode, reverbs become infinite or very long (2–5 minutes), delays go into maximum feedback, and LEDs start blinking and spinning around. Release the bypass switch to let the decay go back to the setting of the DECAY knob.

Active bypass is used in the Astronaut III. The dry signal is completely unaffected. Due to the active bypass, there are no clicks in the sound, and three bypass modes are available:

When the pedal is powered up, one of the LEDs lights up to indicate the currently selected bypass mode:

When the pedal is turned on, the LEDs indicate which sound bank is currently active: