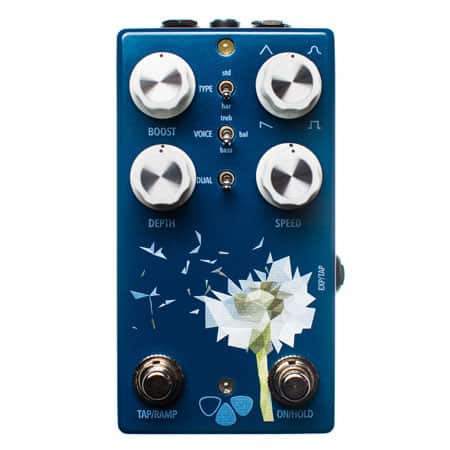 The Flower Pedal Dandelion is a tremolo offering both standard and harmonic tremolo, along with 3 voicings for the harmonic mode (triangle, sine, and square). Controls are available for Boost, Depth, Speed, and Shape. Extra footswitch acts as tap tempo as well as ramping device. A set of secondary controls are accessible by holding the footswitch. Expression jack allows speed control or external tap.

Our official Brooklyn Stompbox Exhibit 2019 videographer collector//emitter saw it at the expo, and we decided to shoot a video of it!

Do you love those little fuzzies floating on a summer breeze?  Take a listen to the Dandelion Tremolo!  It’s an analog optical tremolo with digital controls.  As you may know, there are two different types of tremolo, standard and harmonic.  The Dandelion has both, with 3 voicings for the harmonic tremolo.  Harmonic tremolo stems from classic amps of the past with a warbly, almost vibrato like feel.  Standard tremolo is what most guitarists think of when they think of tremolo: varying the volume up and down.

The Dandelion is feature rich in a small package.  It features silent relay switching and tap tempo as well as controls for Boost, Depth, Speed, Shape, Type, Voicing, and Dual tremolo.  Secondary controls are also available by holding down the Hold (On) footswitch.  The Shape knob allows you to choose between a ramp, triangle, sine, or square wave, as well as all the mixtures in between, giving you lots of options to work with.  Boost lets you control how much volume you want added to the effect, which comes in handy since tremolo is a subtractive effect.  The tap tempo switch sets the frequency of the effect to a quarter, dotted eighth, eighth, or triplet eighth note tap. To change the tap division, just hold down both footswitches for at least 1 second. The power LED will then flash to tell you which division you are on (1 flash for quarter, 1 flash and 1 short flash for dotted eighth, 2 flashes for eighth, and 3 flashes for triplet).  Additionally, if you hold down the tap switch, the speed will ramp to a secondary speed (selected by holding Hold footswitch and adjusting the Speed knob) at a designated speed (selected by holding Hold footswitch and adjusting Shape knob).

Now you may be asking, what is dual tremolo?  In dual tremolo mode, the speed of the tremolo effect is varied back and forth between 2 different speeds. The first speed is chosen by the Speed knob. Then hold the Hold footswitch and select the second speed using the Speed knob as well as the time between when the speed changes via the Shape knob. Then you release the Hold and return the Speed knob back to the first speed. You can use the tap switch to tap the time between speed changes as well.

A couple of little extra features are also available. One is the Exp/Tap jack, which allow you to either use an external tap connection to control tap and ramp or an expression pedal (signal tip) to control the speed. An internal switch allows you to choose between expression and tap. Note: DO NOT plug in a TS cable for tap if you have the switch in expression mode, as it could damage the pedal. You can also choose whether the pedal defaults to on or off on power up by holding the On footswitch while plugging in power.

But I can only say so much.  Take a listen to the demo videos, or go plant a Dandelion in your own pedal garden!