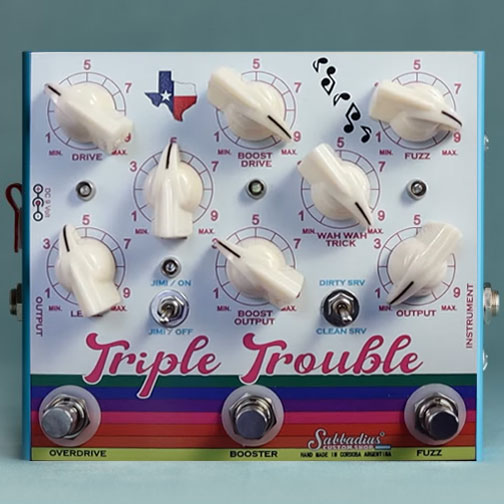 The Triple Trouble is an Overdrive+Booster+Fuzz pedal by Argentinean boutique builder Sabbadius that was discontinued a few years ago. The company just announced the upcoming release of V2.

Counterintuitively, the silicon transistor fuzz is first in the chain, followed by a Tube Screamer-style overdrive and then the boost. The three circuits are optimized to work with each other seamlessly and feature separate footswitches.

It features some interesting controls like the Wah Wah Trick knob, which allows you to tweak the fuzz’s impedance to work with a Wah pedal in front or after it.

The Jimi Mode will activate a Germanium diode on the boost side, but it will affect the tone only when the volume is between 8 and 10. This will decrease the volume, a drop that can be compensated on the overdrive side but turning the SRV toggle (Dirty setting) up.

The company’s owner and designed Nico explains the pedal in-depth in this video by Buddy Blues.

Tommy Katona was the first international sponsor or “endorser” of SABBADIUS, this virtuous guitarist born in Hungary in the city of Pécs and was found on Youtube videos honoring the guitarist Stevie Ray Vaughan (SRV). The way he play the guitar is so precise that I invite to be part of the SABBADIUS Family endorsers.
This was in 2004, and thus began a friendship and patronage of SABBADIUS.
In 2009 he moved to the United States to the city of Frisco Texas and became a North American citizen and where he currently resides.

In 2012 I decided to make a pedal that is called “Triple Trouble” in tribute to SRV (Double Trouble) consisting of 3 pedals that Tommy wanted in a single enclosure.

The SABBADIUS 80 Overdrive Tone, the Mr. White SPECIAL II and the Silicon transistors Texas Square Face type of fuzz by Cesar Diaz, these 3 pedals modified to his preferences.

* The Overdrive:
It consists in a Tubescreamer type of OD, but with some modifications to give a warmer sound like the original and classic sound from the late of 80´s, but with a sharp Overdrive to go forward and a versatile tone control that goes from the deepest bass to the thinnest treble.