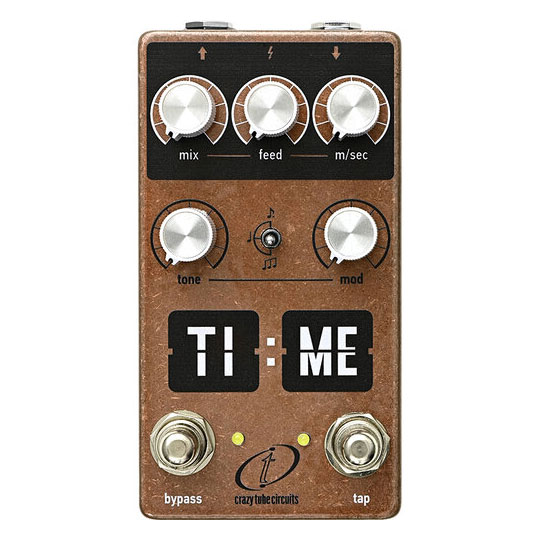 It’s very interesting how, in some cases, new audio technology is at first demonized for its artifacts by an older generation of audiophiles, while a newer generation grows to appreciate its other advantages (like flexibility and ease of use), while slowly growing fond of those same artifacts. Fast forward a few decades, and you may find that what was once seen as some kind of sonic horror is now referred to as “character.” That’s, in short, the story of digital in audio.

Ti:me, the new pedal by Crazy Tube Circuits is a delay inspired by the very first digital delay rack units that appeared on the market in the second half of the ’70s. By today’s standards, at the time digital chips were extremely limited as far as bit and sample resolution, and although the word “digital” in the following decades grew to signify “ultra-clean” audio reproduction, at the time a digital delay could not possibly promise that.

Time (or “Ti:me,” as it is spelled on the pedal) employs separate analog and digital paths to recreate the signature tone of those vintage delays, which sounded a little lo-fi but also warm thanks to a carefully calibrated use of filtering, and that became a signature sound of ambient and shoegaze bands.

The circuit actually uses two digital recording devices placed in parallel, delivering musical repeats reminiscent of worn tape echo, delivering from 130 to 720ms of delay through the Time knob or up to 1 second with Tap Tempo. A 3-way toggle allows to dial in quarter note, dotted eights, and triplets subdivisions.

The bottom section of the pedal includes a Tone and a Modulation knob, while the Tap Tempo footswitch doubles as a Momentary Feedback trigger.

Take a listen to the sound of Ti:me, in the videos below.

Inspired by the first digital delay rack units introduced at the beginning of the “digital audio revolution” in the mid-late 70’s. These units had lower bit resolution and bandwidth compared to today’s digital delay standards.

TI:ME is not your typical sterile and ultra clean digital delay. With separate analog and digital paths to get best of both worlds, this retro inspired echo effect will warm up your tone. An all analog signal path featuring a high quality opamp is used for the best reproduction of your dry signal. Two digital recording devices, along with carefully tuned filtering, placed in parallel with the dry path give you the most ambient delay unit you have ever heard. Think of a Model 113™ rack unit; the repeats are really musical, reminiscent of worn tape echoes.

Each TI:ME unit is hand lacquered in copper colour and one of a kind!