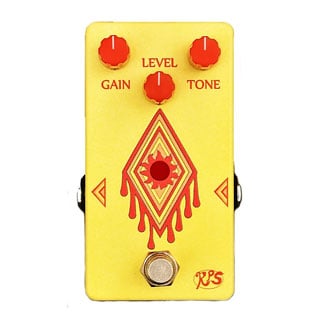 Hailing from Pittsburgh, PA, RPS effects is a brand new pedal manufacturer whose goal is to “produce a quality instrument that can be picked up and played by anyone, while at the same time providing nuanced and deep possibilities that reward exploration.”

Shnobel just posted a video of their Red Sun distortion, streaming below. The other three pedals currently on sale through their website are a lo-fi bit crusher called Bit Reactor, an Analog Delay called Warp Drive, and a two wave tremolo called Tremulus Maximus.

The RED SUN is an analog distortion with controls for Gain, Tone, and Level. Not for the faint of heart, this bad boy has the potential to scorch some eardrums.

A pre-distortion gain control makes possible those effortless long sustains and feedback or, when coupled with a maximum ‘Tone’ setting, a gnarly crunch.

Low ‘Tone’ settings, on the other hand, give the option of cutting off some of the edge, giving a smoother, darker distortion.

Like a feverish mirage seen by the lost desert traveler, the Red Sun will leave you stumbling after your musical oasis.