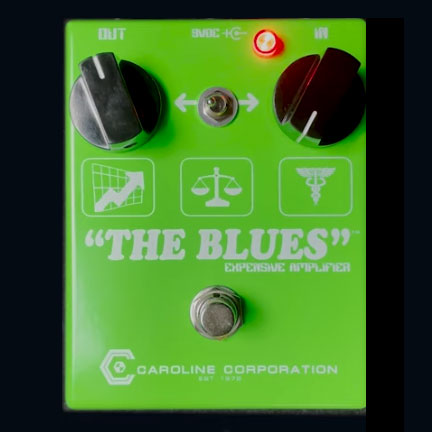 Launched on April 1st by Caroline Guitar Co as a pretend joke, The Blues is a Dallas Rangemaster evolution presented as a gentler cousin to the cmopany’s Hawaiian Pizza transistor fuzz-drive.

The toggle switch in the middle changes gain structure.

The Tube Scream-green color of the first version was part of the pun, and was then replaced by other version in dark blue and gray.

Hear it in the videos below.

I think we should blame Ben for this one. Last fall, he said to me “I think for April Fool’s, we should film a release video for a fake pedal called ‘The Blues’ and it would be all about being ‘bluesy.’ Do you like your blooze ‘vintage’ or ‘modern vintage’? Just have lots of noodley shred and bluesy talk. Maybe we could film you in a fedora.”

Well, we can only blame Ben so much for this, because of course, instead of just sticking with the joke of a fake pedal, we actually made the pedal, and it’s pretty damn cool.