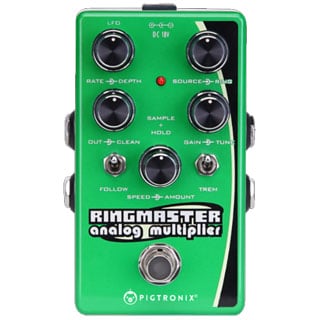 After driving the incredibly successful revival of the Supro amps, it looks like the guys at Pigtronix are refocusing their attention on their first love: guitar pedals.

In advance of NAMM they announced the Pigtronix Ringmaster Analog Multiplier, an “intelligent” ring modulator effect that can sync to your notes frequencies to avoid the alienating dissonances normally produced by this kind of effect.

It does more than that, actually, as it also features – among other things –  a tremolo and an LFO circuit.

Check all the specs and info under the official, video, streaming below.

We added the Pigtronix Ringmaster to our list of the Best Ring Modulator Pedals.

Ringmaster opens the door to a wide array of unique synthesizer tones by allowing the musician to modify both the input signal and the carrier signal, before they are multiplied together. The Source control blends between clean instrument signal and a pitch-following square wave feeding the multiplier, to increase harmonic content. The Gain control pushes the carrier signal into saturation—producing aggressive, non-linear slewing effects and brass sounds. Further warping and manipulation of the carrier signal is achieved with independent, on-board LFO and Sample + Hold function generators. These dual modulation sources can be used to add several layers of motion to the Ringmaster’s unique selection of harmony, ring-mod and tremolo effects.
In addition to tonal harmonizer and atonal ring modulator sounds, the Ringmaster features a Trem function, which divides the rate of the carrier oscillator down into the LFO range to create tremolo. When combined with the Follow function, the tremolo will speed up as the pitch of the input signal goes up, tracking the notes you play and automatically adjusting the rate of the tremolo instantly. This function works extremely well with monophonic (one note at a time) playing but can also produce dramatic and unconventional amplitude modulation effects when chords are played, essentially confusing the pitch-tracking circuit, which will jump to whatever note is loudest at any given moment.

The Ringmaster allows for an external carrier to be injected into the multiplier, enabling cross-modulation of multiple instruments within a single pedal.

The control voltage coming from the pitch-tracking system, as well as the CV signals coming from the LFO and Sample + Hold function generators can be used to modulate outboard gear via the Ringmaster’s CV output jack. This ¼” CV output can be used as an expression controller for other pedals such as the Pigtronix Mothership 2 pedal, or any synthesizer that allows for external CV control.
Features: