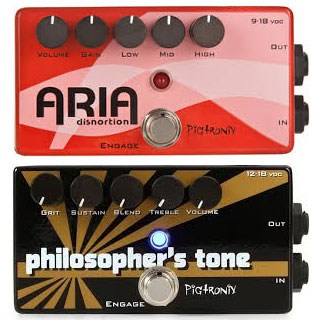 Obsessed with extending the expressive range of the guitar, I compulsively investigate gear that claims it can. I put Pigtronix, a company obsessed with ensuring a future of enhanced guitar expressiveness, to the test with their budget conscious Aria Disnortion overdrive+3 band EQ, and the Philosopher’s Tone compression/sustain synthesizer pedals. Both the Aria disnortion and Philosopher’s Tone’s manuals describe the philosophy behind the pedals, provide starting point settings which are quite useful. Both pedals are housed in an incredibly attractive casing and feature 5 knobs and very bright colored LED indicator.

Pigtronix claims that the Aria Disnortion will “make you write new songs” – in the spirit of their assertion, I’ve recorded a few completely off the cuff clips (including one cool bass jam) that show off many of the different sounds of this pedal. The overall tonality of the pedal is much smoother and more musical than other pedals in its league – and its 3 band EQ gives it a huge range of versatility from singing, creamy violin distortion to classic shattered-palms thrash metal to Overloading Cyborg Elephant. I particularly loved goosing the slightly overdriven channel on my Rivera.

Genuine innovation in the guitar gear scene is very hard to achieve, and even harder to make tradition-worshiping purists care of. Pigtronix is a company that has handily taken on every builder in its class, offering products whose forward thinking design are simply not found elsewhere. Pigtronix stands apart as a company who achieves radical expression-expansion while staying in the alluring analog realm. And like the small companies who make weird but useful pedals, Pigtronix has a reputation for customer service, quality control and artist/luthier endorsements that rivals the most firmly established brands. See some examples – Benjamin Wigler