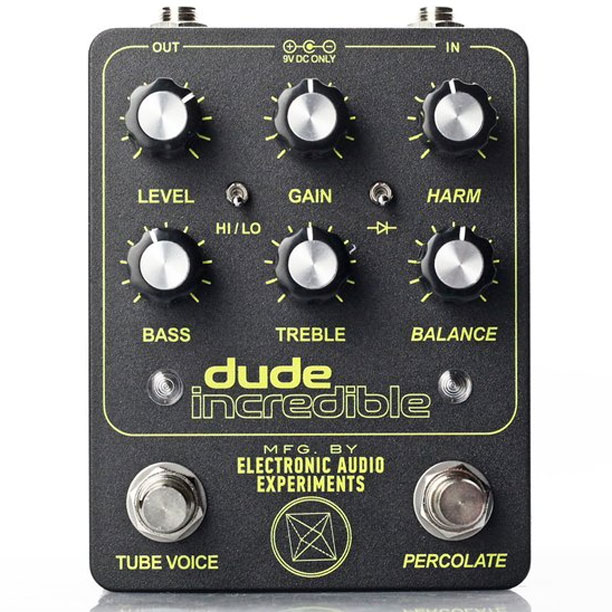 The Electronic Audio Experiments Dude Incredible V2 is a redesign of one of the early circuits by the Boston-based pedal company, a dual gain pedal inspired by the work of indie rock producer Steve Albini.

On the right is a Harmonic Percolator clone, and on the left is an IVP “Tube Voice” preamp, a solid-state preamp from the ’70s responsible for a large part of Albini’s signature clangy guitar tone – this channel can also be found as a standalone unit in the company’s Surveyor). The two channels are placed in series, with the Percolator feeding the IVP.

Each channel has its own footswitch, but the Percolator also has in and out controls (Harm and Balance) that let you fine-tune the amount of saturation and fuzz you get out of it. Playing them together, as you can hear in the demo below, produces – to quote the builder – “produces a devastatingly destroyed fuzz.”

Have a listen to this pedal in the videos below, we added it to our article about the best Harmonic Percolator clones and evolutions.

The Dude Incredible is a pairing of two cult classics: the IVP “Tube Voice” preamp and a percolator-style fuzz. Together, these two circuits have produced some of the most iconic guitar sounds in noise rock: jangly rhythm tones, ear-piercing treble chords, and endless walls of howling feedback. Originally released in 2017, the Dude Incredible was the first adaptation of the IVP into a pedal format. Now, it returns with some extra features and modern reliability improvements.

The Tube Voice channel is our streamlined version of the Intersound IVP (aka Instrument Voicing Preamp), a nearly-forgotten rackmount preamp from the 1970s. The transformer-loaded overdrive circuit is driven by a pre-gain shelving EQ for a distinctive palette of frequency-selective distorted sounds. Far from just a clang machine, this channel is fantastic for medium gain tones or as an always-on base layer. (This channel can also be found as a standalone unit in our Surveyor pedal.)

The Percolate channel needs no introduction. Our take on this beloved two-transistor fuzz features a painstakingly selected germanium transistor based on measurements of an original unit. We also added a diode switch to select between our custom configuration found in the Dude Incredible V1 and a more traditional highly compressed mode. Combining the Percolate side with the Tube Voice side produces a devastatingly destroyed fuzz.

Even if you aren’t a metal-pick-wielding treble fiend, the Dude Incredible is a source of unique distortion sounds that can’t be found anywhere else.