Posted by Pedal of the Day

My fascination with electronics began as a kid at summer camp, where I learned how to solder parts into circuit boards. From then on, I was intrigued with things that many people would consider garbage.  As a teenager, I was in love with tape recorders and CB radios, and I couldn’t resist opening them up to see what made them tick. I would try to do modifications and improvements, and half the time I’d break them and then attempt to fix them. A friend gave me a broken Crybaby wah pedal, and around the same time, I started playing guitar…

Because of that childhood experience, Dave, later in life, ended up landing a position as head technician at Crest Audio (a pro audio company that manufactured high end mixing consoles, later bought by Peavy).

If the name Crest Audio rings a bell, it’s because, in the 1960s, it was called Dallas Arbiter… and if that name rings another bell it’s because Dallas Arbiter was the company that manufactured the original Fuzz Face and Trem Face. After finding some old units in the company’s warehouse, Fox convinced the powers-that-be at Crest to get the Fuzz Face back into production. After selling more than 2,000 pedals in 1990, Crest licensed the design to Dunlop.

Now that you are aware that Dave Fox’s engineering skills are embedded in one of the most popular fuzz pedal reissues ever, we are sure you’ll be interested in knowing more about the pedal company he founded in 2001: in the aughts, Foxrox Electronics manufactured a series of classic designs including the Captain Coconut Muli-Effect and the Paradox TFZ (the first pedal to recreate the over the top through-zero-flanging effect of the ’60s. Some of them were too labor intensive, and were discontinued to make place to simpler and also more affordable models.

The current Foxrox roster of stompboxes includes eight pedals of various shape, color, type and cost. check out the video demo of each by clicking on the images below! 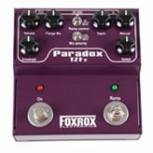 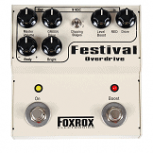 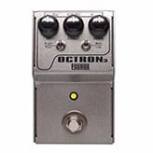 FOXROX OCTRON 3 OCTAVER - $199
Organic analog effect that responds to your playing style/technique. Octave up, down, clean or with a little of each mixed.
1st tap: info, 2nd tap: video
Ebay 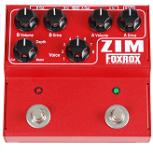 FOXROX ZIM DUAL DRIVE - $259
Two independent effects in one pedal that can be configured a number of different ways, depending on which ZIMcards are installed. The convenient arrangement allows you to easily customize your ZIM to suit your needs.
1st tap: info, 2nd tap: video
Ebay 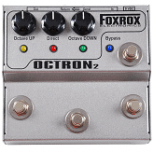 FOXROX OCTRON2 OCTAVER - $299
A special version of the Foxrox Octron pedal with the addition of individual footswitches with LED for Octave up, Direct, and Octave down.
1st tap: info, 2nd tap: video
Ebay 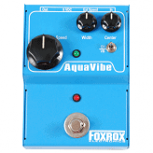 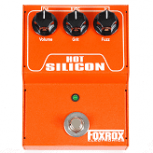 FOXROX HOT SILICON FUZZ - $179
HSF uses a pair of high-gain BC109C silicon transistors, just like many of the original silicon FuzzFaces, and all of the Crest Audio reissues from the late '80s.
1st tap: info, 2nd tap: video
Ebay 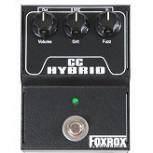 FOXROX CC HYBRID FUZZ - $179
One of the first pedals to use one germanium and one silicon transistor in the classic Fuzz Face circuit.
1st tap: info, 2nd tap: video
Ebay