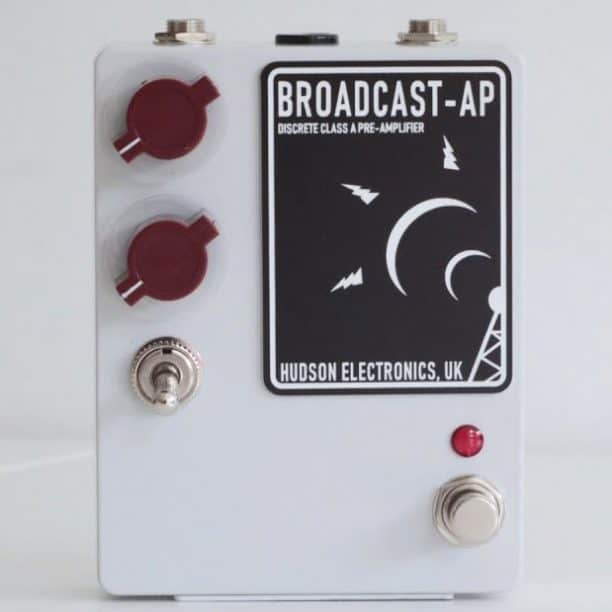 The Broadcast preamp pedal from UK builder Hudson Electronics has a stellar reputation and made several best-of lists when it came out a few years ago. The recently released AP version of it is an evolution of the original design engineered in collaboration with guitarist and singer-songwriter Ariel Posen and features a Silicon transistor, instead of the original Germanium one, in conjunction with an OEP transformer, for a “smoother, more powerful tone compared to the standard version.”

Also, the Trim control has 12dB more gain, for an extended saturation gain covering medium gain overdrive terrain, while an internal trimpot can increase it even more for overloaded fuzzy tones.

At the heart of the Broadcast-AP – as the name may suggest – is the same circuitry as the Broadcast. A class-A discrete, transformer-coupled circuit, designed to saturate in a unique way reminiscent of certain recording and broadcast consoles.

The control layout features both LEVEL and GAIN TRIM potentiometers and a switchable high-pass / low-cut filter – 100Hz @ 6dB/oct. The GAIN TRIM control has 12dB more gain than the low-gain side of standard Broadcast, allowing the Broadcast-AP to cover ground from clean boost through to medium gain overdrive tones. In addition, the gain of the pedal can be increased via an internal trimmer and – when pushed to the max – the sound becomes overloaded, broken and fuzzy. The high-pass / low-cut filter can help keep the low end together, especially when driving amps at higher gain and volume levels.